Nothing ventured, nothing gained

“Some people think I’m always on the phone with friends and family, but I’m actually speaking with clients. That’s the way I work with them.”

‘Nothing ventured, nothing gained,’ says Elizabeth Dillon, the entrepreneurial American who runs Pictet Asset Management’s multi-billion dollar US and Global Financial Institutions business out of London.

Armed with a daily Starbucks grande latte, an infectious laugh, terrific hair, and above all, a steely resolve to close deals, Liz has built one of the fastest growing businesses at the Pictet Group. ‘Some people think I’m always on the phone with friends and family’ she exclaims, ‘but I’m actually speaking with clients. That’s the way I work with them.’ 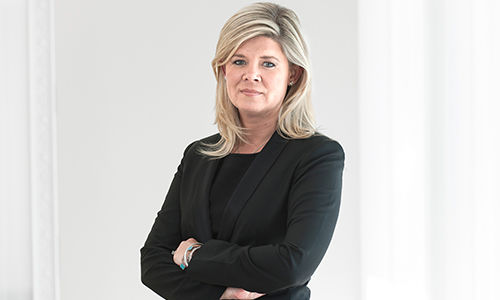 For a quintessential city-dweller, it’s a surprise to learn that Liz was born and raised in a small rural town in upstate New York ‘with more cows than people’.  She never imagined she would end up in finance. ‘My father was a professor of philosophy at New York State University… I studied literature.’

Looking to fulfil her dream of living in Manhattan, she found herself working for Merrill Lynch in her early twenties as a ‘gopher for the investment bank’ and then for JP Morgan Private Bank as a Vice President for marketing.

One day in 2002 Laurent Ramsey, now a Pictet partner, approached her to join the fledgling Pictet Funds business in Geneva. ‘Great, I thought, I do the interview and get to see friends in Paris’, hardly imagining she’d be offered the job. But Liz was intrigued by the idea of working overseas—as a child, the young Liz often listened to her father rehearsing his lectures on European philosophers.

“We are all driven but we get on incredibly well together.”

She took the leap and spent the next four years in Geneva in the fund marketing team. ‘Laurent insisted all meetings were in English, but I learnt French anyway. While I’m definitely not fluent, it was thrilling to discover a foreign language. People appreciate it.’

Having laid the foundations of Pictet Funds’ online presence and growing restless, she asked the Partners for more responsibility. They said, ‘Okay, we’ll give you a two-year challenge, so good luck.’

Liz seized the opportunity and moved to London as Head Of Global Financial Institutions in 2006. ‘By that point,’ she says, ‘everyone I’d been friends with at JP Morgan had left for other banks, so my network  had become much more valuable.’ Wins came swiftly; most memorably a $325m high-margin deal into the Pictet Water fund from a global private bank that same year.

Soon afterwards Liz was asked to look after  US-based clients - probably because, she says, ‘I was the only American they had’. Fast-forward to 2018 and she has fulfilled her mission of establishing a strong presence for Pictet in the domestic US market through sub-advisory, suffering a brutal travel schedule with transatlantic trips on average, once or twice a month. ‘The office, for now, is my handbag,’ she often jokes with clients and colleagues.

After sixteen years at Pictet, Liz has built an important, profitable business and a highly respected team. It’s also one of the most popular units at Pictet. ‘We are all driven but we get on incredibly well together.’ What next? If her record is anything to go by, it won’t be long before this entrepreneurial spirit surprises us again.