And see a country, as he discovered running 250km across New Zealand’s South Island, carrying his equipment on his back for 6 days. Domenico enjoys a challenge. This one was Racing the Planet.

“Everyone thought I was mad and that I’d never make it. I’m not a runner, nor do I have the morphology of one.”

It was in November 2018, over drinks with a fellow MBA colleague, that Domenico first heard about the Racing the Planet ultra-marathon races. Participants cross four of the world’s deserts, travelling 250 km in six stages entirely self-supported. He was particularly intrigued by the fifth race, that changed location every year but was no less of a mental and physical journey. “New Zealand has been on my bucket list for a long time so when I saw that’s where the next race was, I just signed up.” He had four months to train.

First came regret. Then panic. Then he got serious and hired a coach. Domenico’s previous running experience was limited to some light jogging around cities during business trips. There was a lot to learn. “Everyone thought I was mad and that I’d never make it. I’m not a runner, nor do I have the morphology of one.” Training started gently with a daily jog of 5km and evolved to 16km. Then he added a backpack with a 5kg bag of rice in it. Then 10kg. Next he added an extra lap around the reservoir bringing his nightly run to 26km carrying 15 kg of rice. Until one night he got chased by a wild boar after dark. He stuck to the well-lit pavements after that.

The particularity of this race is that it is ‘self-supported’. This means from day 1, competitors carry everything they will need for the next 6 days on their backs. And that their bags get lighter as they progress and eat their way through the race. The organisers provide water every 10km and tents every night. They also ask for 37 mandatory items that participants must carry including food, medical supplies, sleeping bag, cooking utensils, rain gear, sunscreen, headlamp and a whistle. “There is a very thorough inspection at check in before the race and throughout to ensure runners haven’t dumped their gear! My pack weighed 16kg at the start, you drop a kilo a day and about the same in body weight. I’m proud to say my pack was in the top 3 heaviest!” 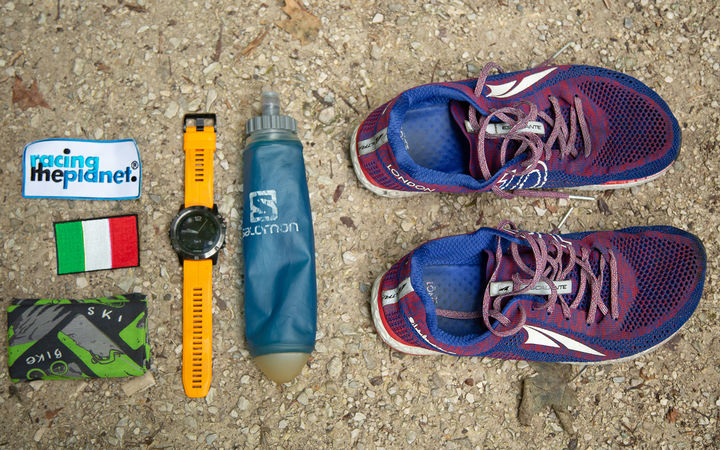 “My shoes had got soaked on day one and never dried out so my feet were covered in blisters”, tells Domenico.

“The physical training was just a small part of my preparation. I learned so much about equipment, nutrition and hydration, finding exactly the right combination for my body. It’s dehydrated food, like astronauts eat. I experimented with many different kinds, some are really awful! They called me Tuna Man during the race because in addition to the packs of dried food I took along six tins of tuna in extra virgin olive oil. It was my one luxury. My fellow competitors thought I was insane carrying all that extra weight. But you should have seen their faces every night when I opened my can. Pure envy!”

The race is run in six stages: 40km for the first four days, 80km on day five and 10km to the finish line. Pink posts mark the route every 10 metres across the wilderness. The course crosses every kind of terrain imaginable: dry rocky plains, thorny heather covered hills, wind-swept, arid peaks, over streams and through farm pastures. Runners must reach the water stations within a set time limit or they’re disqualified. The same goes for reaching camp each evening. About 170 participants show up at the starting line and about 40% drop out by the end of day two.

“I was ready to quit by the second day. I was in so much pain. In all my preparation I had completely missed that we would be running through rivers. My shoes had got soaked on day one and never dried out so my feet were covered in blisters. I ran on Panadol but I was miserable. My running mates had all duct taped their feet before the race. That night I went to sleep thinking ‘if I don’t feel better in the morning, I’m done’”. The next morning Domenico couldn’t put his shoes on.

The organisation of the race relies heavily on volunteers, many of whom are former ultra-marathon runners. “I went up to one of the volunteers to tell her I was leaving. She looked at me and said ‘ok but why don’t you just try and run today? I’ll be there every 10km. Just today. Then tonight you can quit.’ “Damn”, I thought. “She brought out my pride! So I did, I set out. The first 10km were hard. You click into gear the second 10km and then you’re half way so you think, eh, I can’t quit now! She really got me!”

“By day 4 my body had adapted to the rhythm and felt ready to run in the morning. It became enjoyable and I started to notice the spectacular scenery, the wilderness, and vast remoteness. During the day, groups tend to form naturally depending on your cadence. I usually journeyed alone for most of the day and then joined a group for the last 5-10 km. It’s nice to have company especially on day 5, when you travel 80km and in the evenings at camp. It’s a very bonding experience.”

Domenico finished 57th, happy, exhausted, ready for a shower and a warm bowl of tuna pasta (of course!). He looked 100 years old according to his wife who had driven through torrential rain to meet him at the finish line somewhere between Wanaka and Queenstown. He’d also raised USD 15k for an Italian children’s cancer association thanks to the generous donations of Pictet colleagues and friends.

Domenico summarises the experience: “It’s your brain that stops you. The race is an ongoing argument between your body and your mind! And your body can absolutely take it. I don’t need to race again. I went in seeking a challenge, I feel I met it, went through it and have come out the other side.” Next up, Domenico is considering the Clipper Round the World sailing race. And no, he’s not a sailor. Yet.

Domenico lives in Singapore near a nature reserve with his wife, a dog, a cat and a parrot. When he’s not challenging himself, he is a Private Banker for Pictet Wealth Management Singapore.