A premium mode of transport for urban commuters

“Switzerland also has a financially solid investor base – there are not many countries which have so many investors in such a small area.”

Technological innovations offer a Swiss solution to modern traffic problems in the form of a powerful e-bike capable of long-distance, high-speed urban commuting with full connectivity modelled on global brands such as Tesla.

Switzerland may not feature on lists of the world’s leading carmakers, but it is home to the manufacturer of a state-of-the-art form of commuter transport. Stromer battery-powered e-bikes, made in the small village of Oberwangen near Bern, are capable of travelling distances of as much as 180 kilometres at speeds of up to 45 kilometres per hour. Last year more than 10,000 bikes were sold – almost 70 per cent outside Switzerland.

The Stromer e-bike was developed by Thomas ‘Thömu’ Binggeli, a cycling enthusiast. In a farmhouse south of Bern where he started a business repairing bikes, he was not impressed with the battery-powered e-bikes on the market, which were not very fast and quite ugly. So in 2009, he launched an e-bike that was faster and more elegant, inspired by new technologies and global brands such as Tesla and Apple. 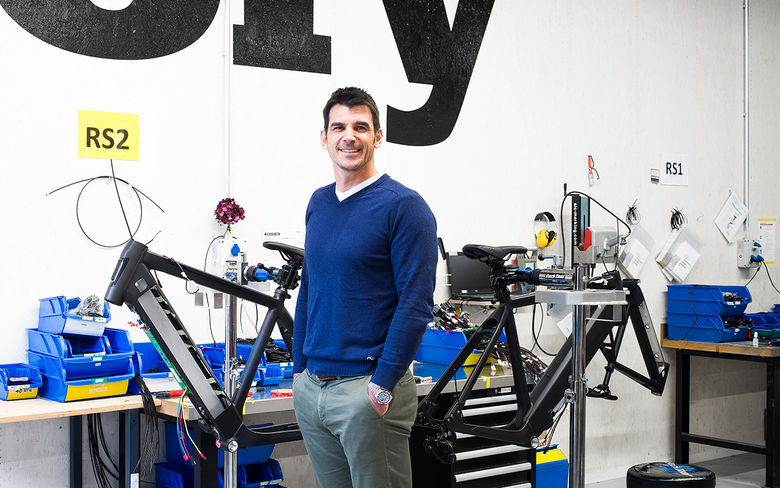 Jakob Luksch joined Stromer as CEO in January 2018, having previously worked in the German automotive industry.

“It’s our mission to design and create premium e-bikes that enable riders to access new experiences and inspire them to think differently about modern commuting.”

The Stromer V1 offered three distinctive characteristics. While most e-bikes put the motor on the frame’s pedals (middle-motor) and connect it to the rear wheel by the chain, Thömu put it on the rear wheel hub, delivering power directly and more efficiently. It was one of the first e-bikes to integrate the battery into the bicycle frame, out of sight. And while most e-bikes – like ordinary bikes – have visible cabling attached to the frame, Stromer e-bikes conceal it inside the frame.

‘Initially financed by Thömu, his reputation in the cycling community meant that it sold quite quickly, despite its price of around CHF4,000,’ says Chief Executive Officer Jakob Luksch. ‘It was immediately recognised as a premium brand, and quickly won substantial financial support from Andy Rihs, a Swiss billionaire with a passion for bicycle racing.’

The next model was the ST1, launched in 2011. The first Stromer with electric support up to speeds of 45 km/h, it was the first model in serial production. This was followed in 2014 by the first connected e-bike, the ST2, which integrated a GSM card that could perform similar functions to those available with a Tesla car. It enables the owner to locate the e-bike using an app on a smartwatch and to lock its rear wheel so that it cannot be stolen. It can also be used by Stromer to download software updates to its e-bikes in the same way that Tesla can for its cars. And the bike can be started from a smartphone app – there is no button or code required.

The ST2 model integrated a GSM card that could perform similar functions to those available with a Tesla car. The owner can locate his e-bike using an app on a smartwatch and to lock its rear wheel, and the bike can be started from a smartphone app – there is no button or code required.

Also in 2011, Stromer merged with BMC Switzerland, a racing bike company owned by Andy Rihs, whose company also competed in international competitions such as the Tour de France. The idea was to find synergies between the two premier brands, but they were different types of bike businesses, and the two companies separated in 2017. Most of the Stromer shares were sold to a new group of Swiss investors.

The company now has four models, the latest being the ST5, priced at EUR9,490. All four are targeted at commuting, with the aim of making it a comfortable and positive experience. They all have assistance up to 45 kilometres per hour and cover a range of up to 180 kilometres before the batteries need to be recharged, which takes two to five hours.

‘The prices range from EUR4,500 to EUR10,000,’ says Jakob Luksch. ‘Each model is targeted at a particular group of people, from the comfort-oriented bike at the entry level to the top level ST5, which can be compared to a motorcycle or sports car in terms of its performance.

‘EUR9,500 for our top-model ST5 might seem like a lot of money for a bike, but a Stromer e-bike is for commuting around 15 kilometres and is therefore competing on price with cars that commute similar distances in Switzerland. The ST5 combines cutting-edge technology in a unique design. You wouldn’t want to ride a normal bike for 15 kilometres, and if you did you would have to change your clothes at work. But you can commute to work on a Stromer in your work clothes without breaking sweat. And while scooters may be cheaper and just as fast, they cannot be used on cycle paths and do not boost your fitness. It’s our mission to design and create premium e-bikes that enable riders to access new experiences and inspire them to think differently about modern commuting.

“The connected nature of Stromer e-bikes makes it easy to share them among families and other users who can unlock them remotely.”

‘Sales to different countries reflect their legislation on e-bikes. Germany restricts the use of fast e-bikes like the Stromer on cycle paths, which means that they have just 1 per cent of the e-bike market. By contrast, Switzerland has much freer legislation and offers state subsidies for e-bikes, which therefore account for a 20 per cent market share. Belgium and the Netherlands are our biggest export markets because they promote the use of e-bikes. State subsidies in France also boost demand.’

The connected nature of Stromer e-bikes makes it easy to share them among families and other users who can unlock them remotely. In Zurich, a sharing company called Smide has a fleet of 300 Stromers which can be rented at a rate of CHF0.25 per minute, driven at a maximum speed of 35km/h and returned by leaving them at any public place inside the city limits.

Stromer opened a new head office at Oberwangen in 2013 on a campus which also houses its management, design, research and development, assembly and customer service functions, as well as a Stromer flagship store – all under one roof. The entire facility’s energy is provided by rooftop solar cells, which also charge every battery used in the assembly of Stromer e-bikes. The assembly of all models, previously done by a bike manufacturer in the Far East, is being transferred gradually to the campus. This brings all functions under one roof, which simplifies development and optimisation, and improves flexibility. 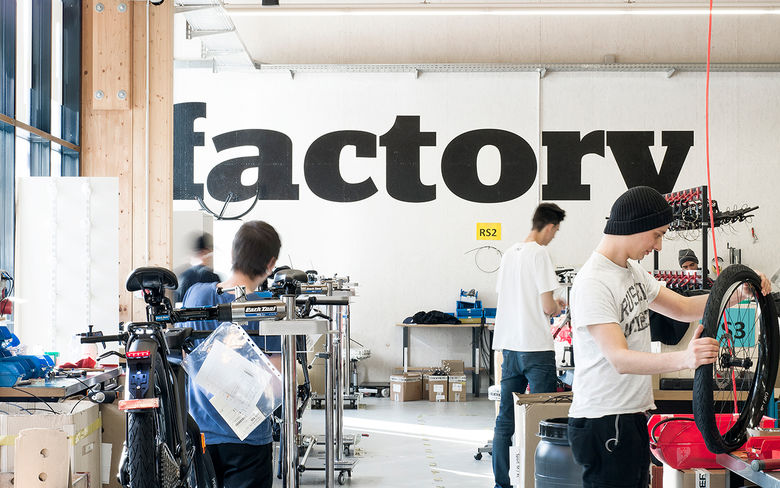 “Switzerland has much freer legislation and offers state subsidies for e-bikes, which therefore account for a 20 per cent market share.”

Jakob Luksch joined Stromer as CEO in January 2018, having previously worked in the German automotive industry. The company had been very successful in establishing a technically superb new brand, but at great cost. The new investor group wanted to ensure that costs were brought under control, and this was achieved by the start of 2019 when he announced that the company had become profitable for the first time in its history.

‘As a foreigner in this country, I can take an outside view of Switzerland,’ he says. ‘It is an excellent place for Stromer to do business. It has a great technical education system, and we are proud to develop and assemble our e-bikes here. Switzerland also has a financially solid investor base – there are not many countries which have so many investors in such a small area.

‘We are premium manufacturers who focus fully on the niche of fast e-bikes for the road. Today we have a bike that is second to none in power, design, range and connectivity. Commuters by car often complain about lack of exercise, but riding an e-bike has a similar fitness impact to cycling, and also contributes to stress reduction. It is silent and better environmentally than public transport – and it provides an unrivalled riding experience.’ 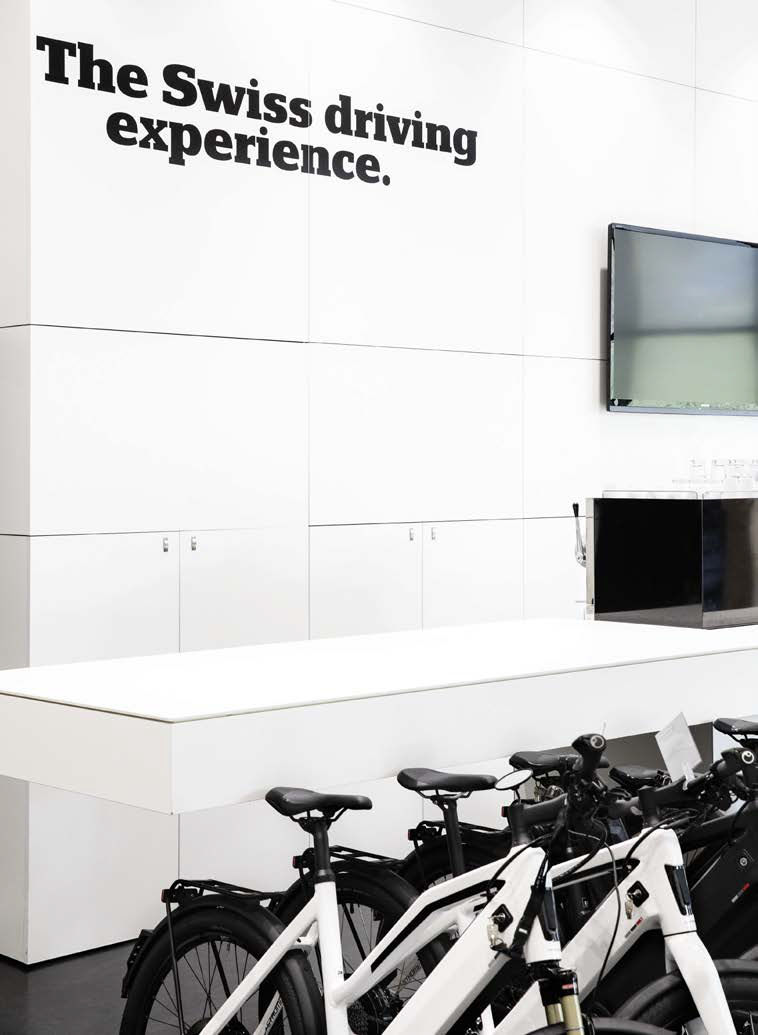