The prospect of diminishing returns for classic, and previously highly effective, 60/40 portfolios (60% equities, 40% bonds) is leading to changes in strategic asset allocation. Efforts to improve prospects include identifying macroeconomic regimes to guide investments and refining how diversification is understood. Interest in endowment-style investing is also growing as private assets are incorporated into strategic asset allocation to boost portfolio returns.

“Large funds have significantly reduced their exposure to traditional asset classes such as public equity and bonds over time, reallocating assets to alternatives such as private equity, real assets and absolute-return strategies.” 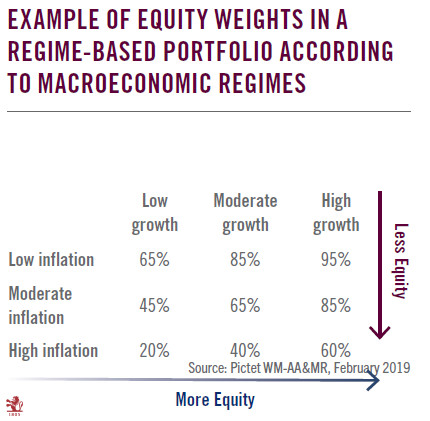 Our research shows that, histori¬cally, a regime-based portfolio would have posted a higher return than a 60/40 one for a similar level of vola¬tility, meaning that a regime-based approach could provide greater down¬side protection during market stress than traditional balanced portfolios.

Even though 60/40 portfolios have a very simple asset allocation approach, it is still difficult for investors to beat the risk-adjusted returns they offer in the long run. Regime-based allocation may be a first step to slightly improve these returns somewhat.

The appeal of endowment-style investing

With the returns from classic 60/40 portfolios set to decline by over half in the coming 10 years, attention has been turning to other forms of stra¬tegic asset allocation, often to assets that offer a liquidity premium, to help investors achieve their invest-ment goals. Specialists are increas¬ingly looking at the style of investing adopted by US endowment funds, which are investment funds estab¬lished on behalf of top-ranked uni-versities and nonprofit organisations.

How do we explain the superior long-term investment returns earned by large endowment funds, espe¬cially over the last 20 years? Large funds have significantly reduced their exposure to traditional asset classes such as public equity and bonds over time, reallocating assets to alternatives such as private equity, real assets and absolute-return strat¬egies. Their allocation to public equi¬ties decreased from 45% on average in 2002 to 32% in 2018 (having fallen to as low as 26% in 2009). The weighting of fixed income fell from an average of 20.5% in 2002 to just 7% over the same period2, whereas the allocation to alternative assets increased from 32% to approximately 60%. The weight¬ing of alternative assets is far greater in large endowment portfolios than in small ones. This provides large US endowment funds with the benefits of diversification and a higher risk premium, which tends to translate into attractive long-term returns. In short, endowment-style investing can help diversification, potentially shielding portfolios at a lower cost than equities. 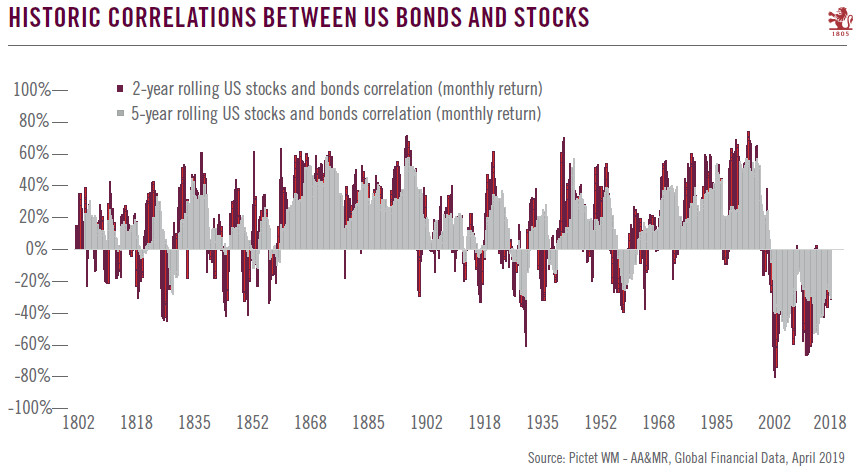 But to reap the benefits of diversification does not necessarily mean adding an ever-greater number of assets to portfolios. For instance, our analysis shows that a fixed-income investor can expect the same returns from a combination of 10-year US Treasuries and US high yield as from US investment-grade credit. However, investment grade investments make more sense in Europe over the same time horizon, where such a barbell approach is less effective. Second, the benefits of a basic diversification strategy involving stocks and bonds could be less than they have been over the past 20 years. Although inflation tends to translate into a higher stock-bond correlation, the outlook for inflation may not be strong enough to move the US stock-bond correlation back into positive territory.

There are two opposite forces at work in our secular outlook for inflation. Under a scenario based on the spread of innovation throughout the economy, inflation is expected to average 1.75% per annum in the US (i.e., a level consistent with a negative stock-bond correlation regime), whereas in the case of a populist regime shift, we see inflation reaching 3.25%, leading potentially to a positive correlation of up to 25%. In other words, populism could lead to a regime shift in the stock-bond correlation from negative to positive.

Our core, blended scenario for inflation, which takes account both of innovation (70% weighting) and the threat of populism (30%), predicts that inflation could average around 2% per year over the next 10 years, close to the current level of the consumer price index in the US. This is the scenario we used to elaborate our 10-year return expectations in the 2019 edition of Horizon. Based on our forecast for US inflation, for the real 10-year Treasury yield (1.9%) and historical statistics, the average US stock-bond correlation over the next 10 years is expected to remain negative. Under this core scenario, correlation between stocks and bonds is likely to remain negative but closer to 0 than the level that has prevailed since 2000. In other words, we continue to expect bonds to help diversify portfolios, but the benefits may not be as significant as in the past 20 years. Lower returns will be the price to pay for the extra protection that benchmark government bonds provide.