The ECB moves to keep euro bond yields down

Prospects of more ECB easing has contributed to an across-the-board rally in euro sovereign bonds yields and could help limit volatility in peripheral bonds.

Since Mario Draghi in June signalled the European Central Bank’s (ECB) readiness to embark on more easing should the euro area economy fail to regain speed, euro sovereign bonds yields have fallen across the board, with the 10-year Bund yield briefly moving below -0.4% (the same level as the deposit rate) in intraday trading on July 4.

We now expect the ECB to announce a second asset-purchasing programme (“QE 2”) later this year and to cut the deposit rate by 10 bps. This should maintain the 10-year Bund yield in negative territory for the rest of 2019: we have a year-end target of -0.2%, up from the current level due to a slight rise in inflation expectations. 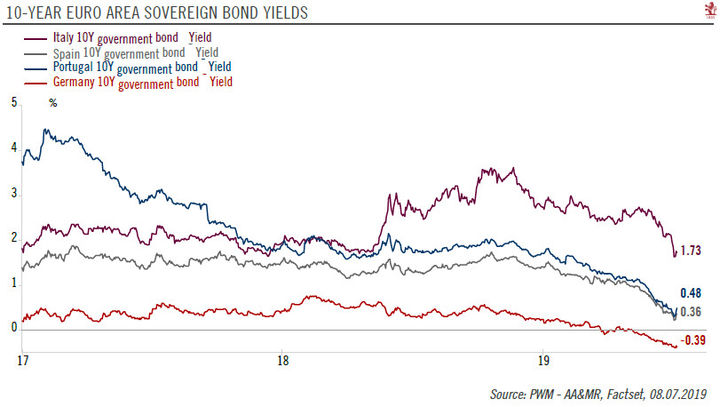 Moreover, as expectations of a new round of QE have built up, so peripheral sovereign spreads versus the German sovereign curve have tightened. The rally has been particularly strong on Italian sovereign bonds, with the 10-year sovereign spread briefly falling below 200 bps in early July. Along with expectations of more ECB easing, spread tightening has also been due to positive news about Italy’s fiscal position.

Renewed ECB easing should reduce the volatility on peripheral sovereign bonds yields in general, with less of a risk that we see a renewed sharp widening of Italian spreads as discussions around Italy’s 2020 budget heat up. We are maintaining our year-end target at 250 basis points (bps) for the 10-year Italian spread over Bunds and have lowered it to 80 bps for the Spanish spread.