“We are now able to facilitate workshops using online tools which not only helps us during confinement times, but also allows us to scale and gather people from all of the organisation’s sites — something we could not do before.”

Pictet’s current head of Applied Innovation has been defying convention all his life. Like Bill Gates, Nicolas Bonvin dropped out of university in his second-year to embark on an entrepreneurial venture at the age of 20. When he abandoned his economics studies at HEC Lausanne in the mid-90s, snowboarding was all the rage. But unhappy with the snowboards then on the market, he launched his own brand called Peach— “a word with multiple meanings from sweet and nice to slang”.

All this he did while performing with his rock band Eastwood at major festivals such as Le Botanique, and Paleo where he won Le Prix de la Scène. It was a music genre similar to the rap rock or funk metal band, Rage Against the Machine. And it came with an alternative lifestyle with its own social norms, festivals and cult heroes. 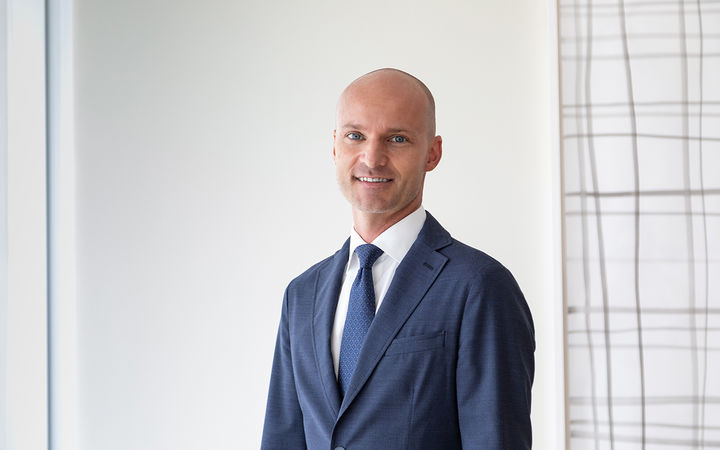 As a pioneer in introducing freestyle boards in the European market, the snowboarding phenomenon—which would soon be considered an Olympic sport—eventually carried his company to seven-figure revenues. “We were simply trying to push the sport forward, by inventing new tricks, exploring new terrain and trying new board shapes.”

But he’d surfed the wave and it was time to defy convention once again. After falling in love with internet technology, he retrained as a software engineer and within 5 years this former rock musician and punk snowboarder turned up at Pictet.

For the past two years head of Applied Innovation at Pictet, Nicolas has managed to keep embracing change and market disruption throughout his career. “People often think that innovation is mainly a creative process. But bringing new valuable products on the market is really a problem-solving exercise.” A unit created as a result of the merger between the IT and Asset Services operations departments. Nicolas was first to lead the unit and to design programmes from scratch with a core mission to expand Pictet’s innovation capacity.

“I have definitely thought of a few ventures that could be launched to respond the current pandemic.”

This is done on two levels, he explains the first one is about transforming the organization to bring our exploration capabilities up to par with our operational excellence. This means having the right mindset, increasing entrepreneurship, taking calculated risks, and turning failures into learning opportunities. The second one builds upon these capabilities to turn ideas into concrete deliverables, something that is done through our incubator, business hackathons, or our design center which provides a collaborative framework to helps teams move from an idea to a solution proposal in a three-week time frame.

Drawing on with his talent for performing on stage, Nicolas is a regular speaker on digital transformation and innovation both internally and externally. His last talk was at the `Private Banking & Wealth Management Conference’ in Zurich last year, where he spoke in front of an audience of 200+—an equally enthusiastic if somewhat smaller crowd than the 3,000 or more music fans he’d once played to back in his touring days in the late 90s.

Working from home has surely sapped his entrepreneurial spirit? He argues otherwise. “I have definitely thought of a few ventures that could be launched to respond the current pandemic,” he says. “We are now able to facilitate workshops using online tools which not only helps us during confinement times, but also allows us to scale and gather people from all of the organisation’s sites— something we could not do before.”

What would he advise his younger self? “Do challenge others and the status quo, but do also challenge your own beliefs.” It’s clear from his expression that the discipline and determination in problem-solving that led to his unconventional early success are going to keep Nicolas busy at Pictet for some time to come.