The Sea of Tranquillity

Whether it is the currency, growth, employment or public finances, Switzerland’s stability remains a source of envy. But growth is slowing and a series of medium-term challenges place a question mark over some of its policy options.

The Swiss economy posted impressive GDP growth in 2018, although there was significant divergence between strong growth in the first half and stagnation in the second. Overall, we expect Swiss GDP to expand by 1.3% in 2019, down substantially from 2.5% in 2018. Risks to our growth outlook for Switzerland are tilted to the downside.

“The deceleration in growth is likely to weight on Swiss exporters for some time.”

Looking ahead, we expect the Swiss economy to slow. Fundamentals supporting domestic demand remain solid, but the challenging global environment, especially the difficulties encountered by some key trading partners, are weighing on Swiss exports. Consumer price inflation should remain moderate in 2019. In the absence of any marked appreciation of the CHF, we forecast Swiss headline inflation to average 0.6% in 2019, down from 1.0% in 2018. 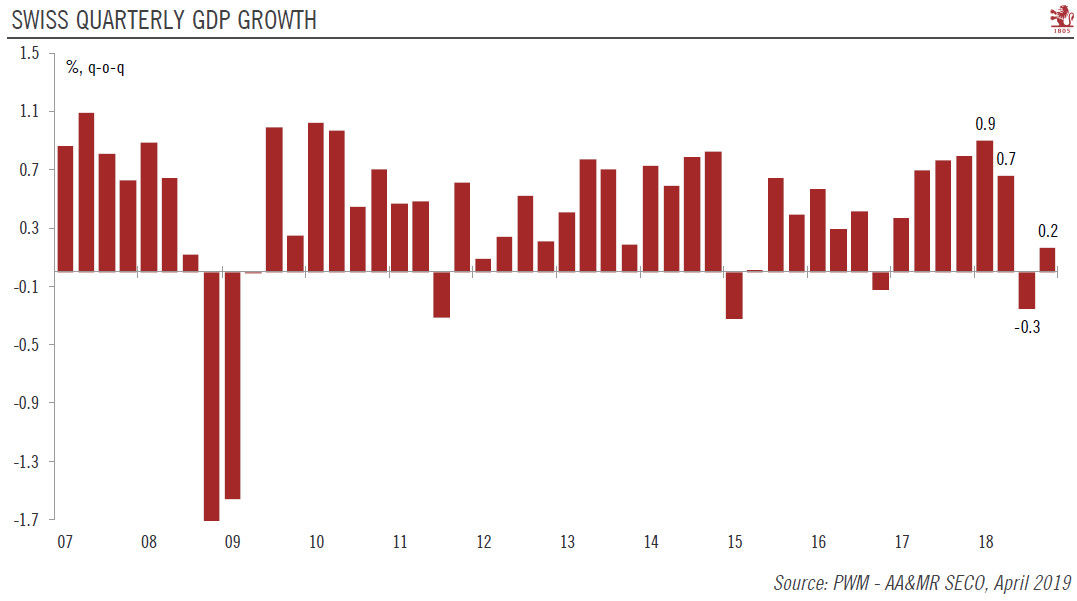 We expect the Swiss National Bank (SNB) to maintain its accommodative monetary policy throughout 2019. We do not expect the SNB to move before the European Central Bank (ECB) which we think will raise its deposit rate first in March 2020, and a second time in September 2020.

The Swiss federal budget is governed by a strict expenditure rule, which is enshrined in the Constitution since a 2001 referendum backed the idea of a ‘debt brake’. Since its introduction, the ratio of public debt-to-GDP has been significantly reduced, falling back to its early-90’s level. At the close of 2018, the Swiss federal budget registered a significant surplus of CHF 2.9 billion, compared with budget projections for a surplus of CHF 295 million. Over the last 10 years, the Swiss government has consistently underestimated the federal budget surplus, with 2014 being the only exception.

“Switzerland faces some medium- and long-term challenges, but the country has ample fiscal space.”

Switzerland was lucky in the timing of the introduction of its fiscal rule, right on the cusp of an economic upswing. The period between 2003, when it was implemented, to the global financial crisis saw strong economic growth in Switzerland (on average 2.8% per year between 2003 and 2007 in real terms), enabling the government to easily generate budget surpluses that were used to pay off debt.

Nevertheless, the Swiss government’s systematic underestimation of the federal budget surplus raises some questions over the efficacy of the budget planning system. Indeed, some aspects of the debt brake rule could lead to some underspending. On this point then, something does need to be done.

While the debt brake is considered a success, critics in Switzerland are saying that too much focus has been put on reducing debt. While there is a consensus among economists that over the long run a rising public debt is not sustainable, From an economic point of view, nothing calls for public debt to fall to zero. So why not just try to stabilise debt as it current low level? Admittedly, the country faces some medium- and long-term challenges but the country has ample fiscal space.

The Swiss franc has been supported by a structural current account surplus and by reduced investment flows out of Switzerland since the 2008 financial crisis. In addition, the decline in global yields since the Fed’s dovish shift early this year has rendered interest rate differentials less unfavourable to the franc.

The upward pressure on the franc has forced the SNB to intervene repeatedly in the FX market to rein in franc strength in recent years. While, in theory, there is no limit to the scope of these interventions, an increase in investment flows out of Switzerland would definitively help reduce the upward pressure on the Swiss currency. As things stand, our expectation that global economic growth will firm in the second half of the year coupled with abating political risks surrounding the euro area (e.g. Brexit) should sap franc strength, especially against the euro, in the coming months. In the longer term, however, reduced upward pressure on global yields, the moderation in global growth and residual risks surrounding the euro area mean the franc may not soften all that much.