At this mature stage of the business cycle, it makes sense to consider the possible next steps in economic policy, given that we believe it likely that central banks and governments will do their utmost to prop up the bull equity market as well as economic growth. This will be especially true in the US as the 2020 presidential election comes into view.

Given that interest rates are already at historic lows and accumulated debt is high, there does not seem to be much room for the authorities to loosen policy further. However, the situation varies from country to country. According to our analysis, countries like Switzerland, Korea and the Czech Republic still have both fiscal and monetary space, with nominal interest rates below their historic averages and public debt-to-GDP ratios below 60%. Others (the US, Canada, the UK, France) still have monetary space, but limited fiscal space, while Brazil and Hungary appear to have neither fiscal nor monetary room to stimulate their economies.

In the US, while the end-2017 Trump tax cuts left public finances stressed, economic growth has been better than in most of the developed world and unemployment is below 4%. This situation has given rise to the debate around modern monetary theory (MMT), which posits that since currency remains a public monopoly and the US is able to borrow in its own currency, government deficits do not matter. In these circumstances, fiscal policy should take the lead in managing inflation and the economy rather than monetary policy. The proponents of MMT argue that changes to taxes and spending impact the economy faster and more predictably than rate policy. They may have a point: given the low level of rates, a fresh dose of negative interest rates and quantitative easing may not prove all that effective once the next recession strikes.

While MMT is not necessarily the only alternative, differences in the scope for public stimulus could have an impact on market trends, especially for equities. Comparing price earnings ratios of various markets with our Fiscal and Monetary Index (FMI), which calculates countries’ fiscal and monetary space combined (see chart), one sees that Japan and Sweden have both policy space and equity market valuations that are below their average for the period 2007-2017. But there are many more markets where, although there is still room to ease policy, equities are expensive, or at least fairly valued. And then there are markets (Brazil, Hungary, the UK, Italy, France) with very limited policy space and high price-earnings ratios. 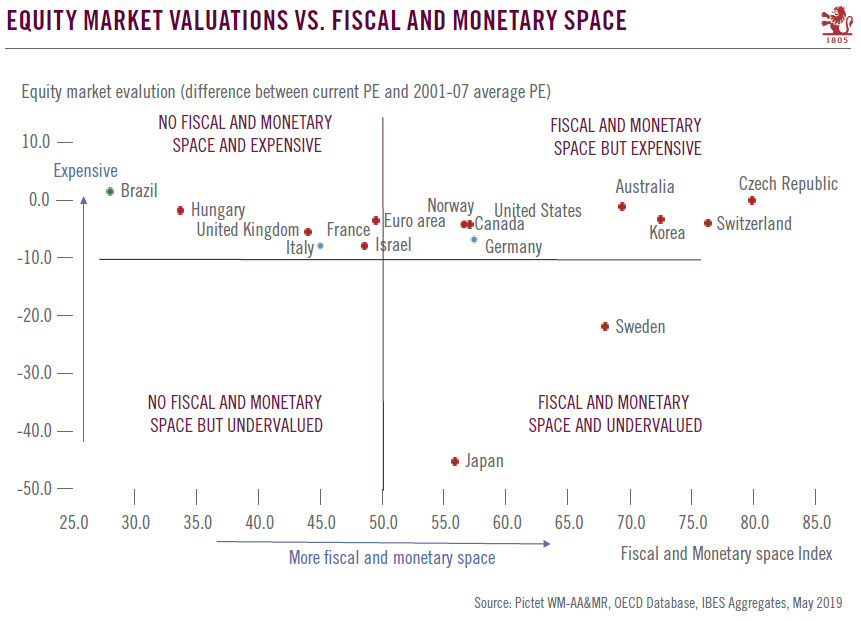 While the situation differs from one country to another, an approach to economic policy that combines monetary and fiscal measures in new ways could result in a further expansion in valuations and keep long-term interest rates low especially as, for now, the golden rule is broken (in other words, the ‘rule’ that says that nominal rates should be close to nominal GDP growth). In these circumstances, we continue to favour equities over bonds.