It took an earthquake for self-reflection ― Stefan

In Spring 2015 Stefan took a 3-month sabbatical. The plan was for a bit of solo soul-searching, combined with some travel and trekking in the Himalayas. But things took an unexpected turn...

Stefan’s story in his own words

“For the first part of my sabbatical, I planned to attempt the Ice Col trek in Nepal. It’s not a technically difficult trek, but it takes place at 5000m above sea level and lasts three and a half weeks. It was going to be a moment for self-reflection at high altitude in simple living conditions, just myself and a group of Sherpas. The alpinist challenge was also an intriguing element for me. Well. I sure got the challenge and self-reflection!

After a 30-minute plane ride from Kathmandu to Tumlingtag followed by an eight hour bouncy jeep ride on unsurfaced dirt roads, we reached Num, the starting point for the trek at 1500m, shortly before dinner. Villagers came rushing towards us asking us what we were doing there. Their village had collapsed. During our bumpy journey, we had completely missed a massive 7.8 earthquake that had shaken the country. My crew were worried about their families back in Kathmandu. Cell reception, which is patchy at the best of times, broke down completely. Even the SAT phone couldn’t pick up a signal and I had no way of getting through to my family and fiancée back home.

After some debate, we decided the safest option was to go ahead with our trek. Densely populated areas were in chaos and aftershocks were still frequent. Both the Sherpas and I felt comparatively safe where we were. So we revised our route, staying off the beaten track, walking through rural, isolated areas where there was little damage. It was a very peculiar time. Every day something would happen that made me question my instinct and inner judgement. My journey of self-reflection had begun! 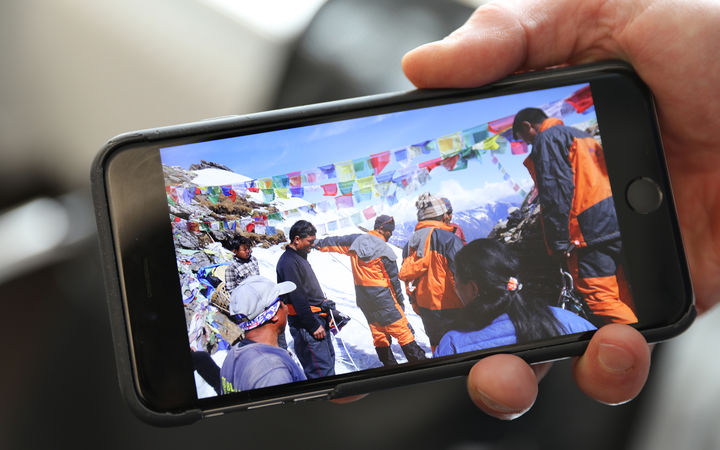 During his 3-month sabbatical, Stefan travelled and trekked in the Himalayas.

One afternoon, our group was suddenly surrounded by roughly 50 armed soldiers of the Nepalese army. In a developing country this is usually cause for concern and my first instinct was to fear that they were looting and pillaging. It turned out they were accompanying a group of army doctors seeking to help earthquake victims, travelling from village to village. Despite the magnitude of the quake, they found very few casualties in rural areas as most people had been working in the fields at the time. The doctors found themselves treating chronic coughs due to fireplace cooking instead. We shared the campsite for the night, tents side by side with what felt like really young soldiers from poor families on a field trip, away from the boring barracks, giving the whole situation a rather surreal touch. Despite the initial scare, it was the safest I felt the whole trip.

In such rural areas, word quickly spreads when travellers are in town. One evening in a village where we’d stopped for the night, a man absolutely wanted to talk with me. He was swaying, clearly drunk. I instantly assumed he wanted money for alcohol. Wrong again! He’d heard that a Swiss man was passing through and he wanted to tell me about his hair-raising expedition leading a Swiss group to Manaslu, close to the epicentre of the quake a few days earlier.

These are just two examples but I was repeatedly reminded throughout my trip how my first impression was not always the right one. I was very quick to mistrust and assume the worst in a situation or in people. Some kind of survival instinct, I guess, but it was very often wrong. It is something I’ve been mindful of ever since.

Nepal had one last surprise in store for me. After 17 days trekking, I finally returned to Kathmandu to catch my flight back to Zurich. Being one of the few tourists left, I was treated to the penthouse suite, top floor, with an excellent view of the city until I was due to fly out a couple of days later. For someone who manages risk every day, what a bad risk assessment I made accepting this room!

I made full use of the massive suite and unpacked all my gear to sort it, dry it out and check what condition it was in after the trek. All of a sudden, out of the window I see huge flocks of birds rising above the city and the curtains start to sway side to side. It was 12 May, nearly three weeks after the first earthquake. This was a 7.3 magnitude aftershock and I was experiencing it on the 17th floor of an old, outdated building. The swaying was so strong that I ruled out running down the stairs and stood in the door frame of my room, looking into the hallway. I shared an eerie moment of camaraderie with a cleaning lady stuck on the same floor. I imagined we were both thinking, “This is it, what a stupid way to go.” 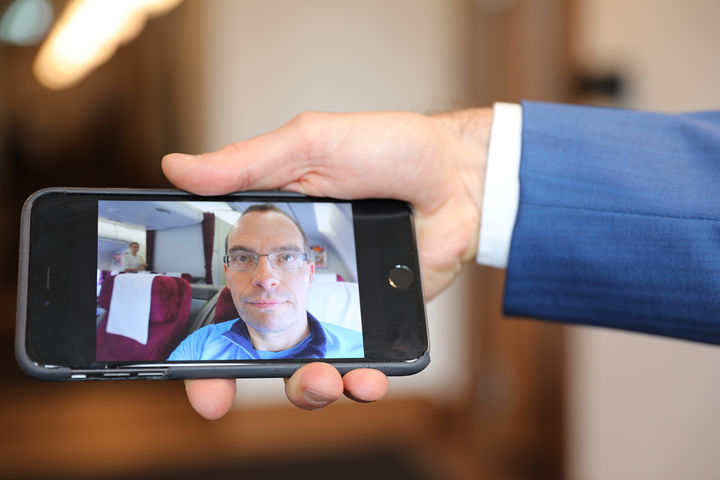 “From time to time I still look at the selfie I took during take-off: shell shocked, pale and panicked, but alive and grateful!”

After what felt like an eternity, the building stopped rocking and I fled to the airport. I didn’t pack. I grabbed my passport, my wallet and my phone and just ran. I’d had enough! By some miracle I was in the air six hours later. From time to time I still look at the selfie I took during take-off: shell shocked, pale and panicked, but alive and grateful!

Still today, over six years later, that photo serves as a gentle reminder of how thin our veil of civilisation is and how little it takes to destroy our illusion of comfort and safety. The daily surreal moments for self-reflection were a personal game changer and made my sabbatical a true time out. Life is short and valuable, so take care to enjoy it every day.”