China and EM equities: the challenges ahead

In this interview, Pictet Wealth Management analysts discuss the outlook for a slowing China and the pay-off between risk and returns in emerging-market equities.

“China’s share of the MSCI EM index could rise above 40% in the next decade.”

How optimistic are you about China over the next 10 years?

We estimate that real GDP growth will slow gradually over the next 10 years, to an annual average of 5.0% in 2025 and 4.6% in 2028. This compares with over 8% in the period 2008-2018. This is mainly due to the ageing of the population and the disappearance of the demographic dividend, which is typical of a maturing economy.

However, China faces several challenges ahead. With lower potential growth, servicing debts is likely to become increasingly hard. While we do not expect an imminent financial crisis, given the Chinese government’s tight control of the overall economy (and the financial system in particular), risks are accumulating. At the very least, the historic misallocation of financial resources to heavy investment could lead to massive inefficiency and hinder China’s efforts to boost productivity. In addition, the decline in relations with the US will expose China to rising external risks, whether in the form of a ‘tech war’ or in a wide range of potential geopolitical disputes.

On the positive side, we see that China’s transition from an investment-driven economy to a consumption-driven one is well underway. Household consumption is contributing an increasingly large share to headline growth. Also, China is climbing up the value chain quickly as more resources are devoted to R&D. Tech giants have emerged in China to compete with international peers. This means that even though China’s headline growth is expected to decline going forward, there should be plenty of investment opportunities in selected areas.

How serious actually is the debt overhang in China?

Total debt in China has risen sharply since the global financial crisis, from 156% of GDP in 2008 to 278% in Q3 2018. Corporate leverage, at 140% of GDP, is among the highest in the world, while household leverage rose to 54% of GDP in Q3 2018 from 18% in 2008. Such debt levels are likely to constrain Chinese growth ahead, while the government’s efforts to contain further rises in indebtedness could add to financial risks if not properly handled. While the authorities have eased back on these efforts because of the recent slowdown, the long-term aim is still to deleverage the economy—for example, by regulating and restricting shadow banking. This aim should benefit the economy in the long term. But in the short term, the large amount of credit withdrawn from the system has led to liquidity crunches, as companies, especially small- and medium-sized ones, have found it hard to access alternative financing. This was one of the main reasons for the recent sharp deceleration in economic momentum and the rise in corporate defaults.

How do you see the future of Chinese equities?

The stellar rise of Chinese equities in the past 20 years is far from over. As China’s capital markets further integrate into the global economy, local stocks (A shares) will be increasingly included in global benchmarks and appear on international investors’ radar. This means increasing prominence in standard asset allocations, which the rise of passive investing will amplify. China could account for 40% of the MSCI Emerging Markets index (compared with ~32% today) were its onshore equity markets fully included—potentially even higher should China’s growth relative to the rest of the world exceed expectations.

With size comes influence. As China keeps growing, the idiosyncrasies of its economy and stock market will increasingly matter for global investors. There is therefore little doubt that China’s clout on global markets will keep rising for the foreseeable future. 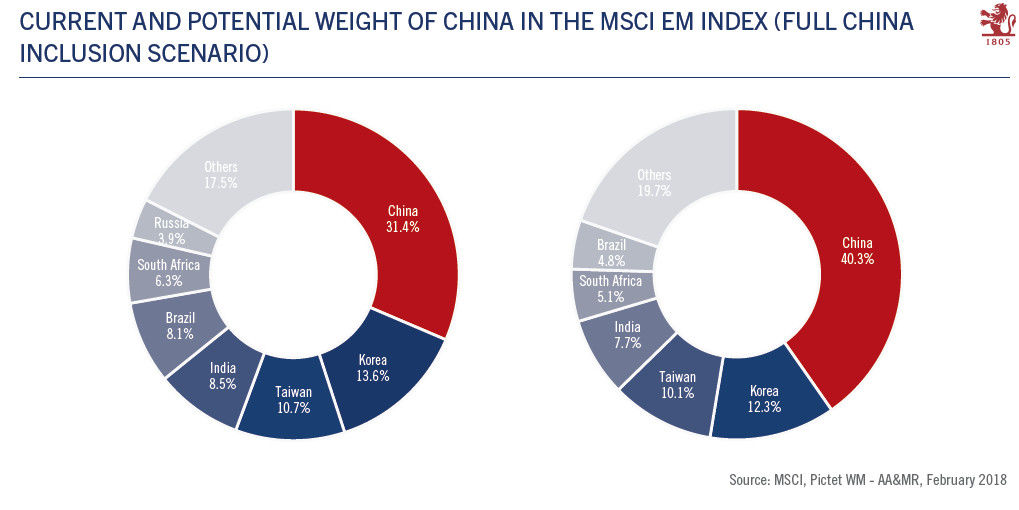 Will the rest of Asia continue to benefit from the migration of global supply chains away from China, where labour is becoming more expensive?

That seems probable, with Vietnam likely standing the best chance to become a major manufacturing hub in the decade to come. However, China cannot be entirely replaced. Manufacturers often find that productivity is lower elsewhere and that logistical costs are higher. Nor can the same economies of scale be achieved as in China. All in all, rising labour costs in China (and in other parts of the region) mean that Asia is likely to be a source of global inflation rather than deflation in the next 10 years.

You are quite upbeat on India’s prospects…

In our view, it is highly probable that India will deliver a strong economic performance over the coming 10 years as it reaps the same demographic dividend as China has over the past quarter of a century. In our base-case scenario, we expect Indian growth to remain above 7% annually until 2025 before moderating.

“It is highly probable that India will deliver a strong economic performance over the next decade as it reaps the same demographic dividend as China did.”

By 2028, India will have replaced Japan as the world’s third-largest economy. Apart from favourable demographics, our bullish view of India hinges on the Indian government’s ability to overcome a number of important structural obstacles and its commitment to structural reforms along the lines of the 2017 overhaul of the tax system, which saw the introduction of a national goods and services tax (GST). At the same time, the relatively slow pace of industrialisation is concerning, and public governance (the ability of the public authorities to implement policy) remains an issue. Last but not least, there is the threat that short-term, populist-type policies and sectarianism damage India’s long-term potential.

Will emerging-market (EM) equities continue to offer higher returns than their developed-market equivalents over the coming 10 years?

We calculate that EM equities will deliver average annual nominal returns of 7.1% (in US dollars) over the next 10 years, compared with 5.9% for the main developed-market (DM) index, the MSCI World. But things are a bit more complicated when one looks at the trade-off between returns and volatility. The Sharpe ratio (which adjusts an investment’s performance for risk) for EM equities has been superior to that for DM equities only 51% of the time since 1987. Put differently, EM equities have been a better risk-adjusted investment than their DM peers only half of the time over the past three decades. Still fresh on investor minds are the two ‘lost decades’ (1994-2004 and 2007-2017), when the MSCI EM index essentially posted a zero total return.

So what needs to happen for EM equities to outperform?

Developed economies (especially the US) would need to do neither too well, nor too poorly. If growth is high in the US, investors have little incentive to seek opportunities elsewhere. But if it is too weak, they tend to develop negative views on growth worldwide, leading them to turn defensive and repatriate assets. The sweet spot for EM equities is therefore an intermediate situation where the developed world grows at a moderate pace, while EM economies, and China in particular, grow sufficiently fast to justify the extra risk. If our central scenario holds, this may well be the case in the coming years, thus continuing to justify the inclusion of EM equities in investors’ portfolios.