Bar a further major escalation in trade tensions, it is hard to see much more upside for gold in the short term. We remain more upbeat over the medium term.

“Although central bank demand should remain robust, it constitutes only a limited share of total gold demand.”

The gold price soared to a fresh five-year high on 20 June following a dovish Fed monetary policy meeting. Indeed, the dovish shift among major central banks (with the sole exception of the Norges Bank) and high global uncertainty have pushed global yields lower recently, reducing the opportunity cost of holding gold. Indeed, since late-2018, a correlation can be seen between the price of gold (which offers no yield) and the volume of negative-yielding bonds outstanding.

Given relatively resilient global risk appetite (at least when looking at implied volatility in the US stock market), the reason for the recent upward pressure on gold undoubtedly stems from the general dovish shift among major central banks and its impact on global yields. Indeed, lower global yields are supportive of non-yielding assets such as gold. But while we remain positive on gold in the medium-to-long term, we see limited upside potential in the near term, as the US economy remains relatively strong and recent developments suggest that a collapse in trade negotiations between US and China is unlikely. 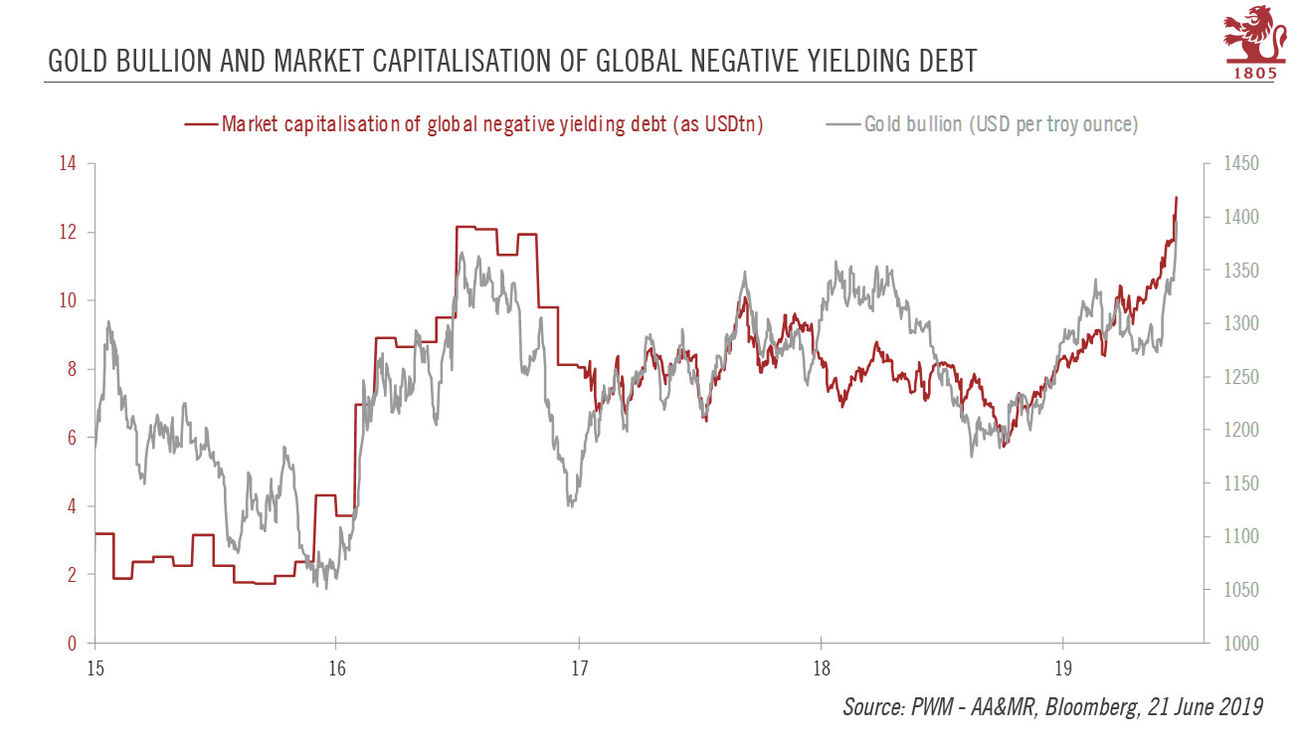 Barring a breakdown in the trade negotiations between US and China at the G-20, investment demand is unlikely to improve much further as inflation remains low and we do not expect significant US dollar weakness in the near term. It is true that seasonal jewellery demand should improve in the second half of the year, but the impact should be moderate. Although central bank demand should remain robust, it constitutes only a limited share of total gold demand. In addition, the fact that short-term investors already hold elevated long gold positions means we see limited upside for gold from current levels.

We would favour a buy-on-weakness strategy, with a price of around USD1320 per troy ounce an attractive entry point. Barring a collapse in trade negotiations, we fail to see gold prices going significantly higher than USD1400 per troy ounce in the next three months.