Attractive yields and low correlation with other bond segments are just two reasons why investors should consider Chinese local-currency debt.

“The opening of China’s onshore bond market is a natural extension of earlier policy moves that opened its equity markets, with both initiatives aimed at attracting portfolio inflows.”

The size of the Chinese debt market (including all debt securities denominated in renminbi and hard currency) rose by 479% in the 10 years to December 2018, making it the world’s second largest after the US, where total debt grew by a more modest 36% over the same period (see Chart 1). The rise of China’s bond market parallels that of its economy, which surpassed Japan’s to become the second largest in the world in 2010. However, until very recently, renminbi-denominated Chinese bonds have been absent from the main local-currency bond indices, and hence from most foreign investors’ portfolios. 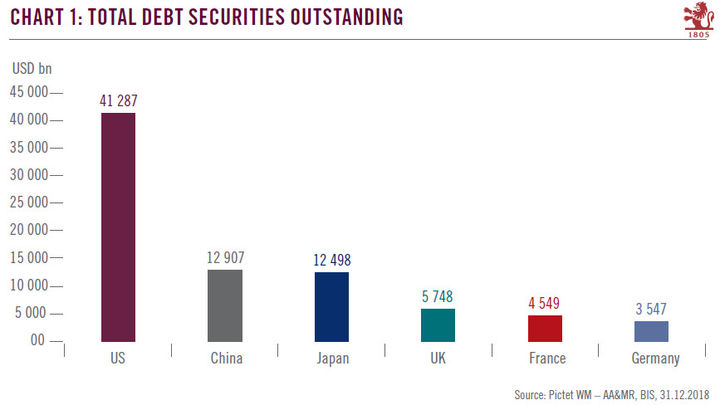 Unsurprisingly, this absence is largely due to regulatory reasons, as the Chinese authorities have taken their time about opening up the country’s financial markets to foreign investors. However, while capital controls remain in place, over the past year the Chinese authorities have taken steps to guarantee relatively smooth access for offshore investors, paving the way for the inclusion of renminbi-denominated bonds in the main bond indices. They have been included in the Bloomberg Barclays Global Aggregate Index since 1 April (with their share of the index to increase progressively until end-2020) and are under consideration for inclusion in the JP Morgan Government Bond Index-Emerging Markets (GBI-EM) Global Diversified . Chinese bonds’ inclusion will likely attract significant inflows from fund managers who track these indices, making it imperative for international investors to grasp the dynamics of this new market.

There are good reasons behind the Chinese government’s push to open its capital markets to foreign investors.

The structural shift in China’s balance of payment makes portfolio investment inflows increasingly important. In the decade before 2014, China was mostly able to maintain a twin surplus in both its current account and the capital & financial account (which measures cross-border investments in financial instruments and changes in central bank reserves). However, since 2014 there have been major changes. First, China’s capital & financial account has swung into deficit as outward investment has picked up. The deficit widened sharply in 2015 due to capital outflows following devaluation of the renminbi. While the deficit has narrowed as the Chinese authorities have tightened up capital controls, the balance has remained in negative territory. In Q1 2019, China ran a capital & financial account deficit of USD39 bn. Second, the Chinese current account surplus is shrinking due to the declining surplus in merchandise trade and rising deficit in services. The Chinese current account fell into deficit in Q1 2018 for the first time since 2001. While it managed to show a small surplus at the end of 2018, the days when China ran large current account surpluses are likely behind us.

This structural shift in China’s balance of payments implies that to maintain the current level of foreign reserves (roughly USD3.1 trn), which serve as an important buffer against external risks, China will increasingly rely on foreign capital inflows, through either foreign direct investment (FDI) or portfolio investment.

Opening of China’s onshore bond market is a natural extension of earlier policy moves that opened its equity markets, with both initiatives aimed at attracting portfolio inflows. Opening up the capital markets is also an integral part of the Chinese government’s push to internationalise the renminbi. Effective 1 October 2016, the International Monetary Fund added the renminbi to its Special Drawing Rights basket of currencies. While this was a milestone for the renminbi, in order for it to become a truly international currency (and eventually a major reserve currency), the Chinese government must make it more attractive to global investors, including central banks. Opening up the onshore capital markets is essential for this purpose.

Some key characteristics of renminbi-denominated bonds

Chinese sovereign bonds (i.e. those issued by the central government) represent one of the safest, biggest and most liquid segments of the Chinese bond market, along with local government bonds and bonds issued by policy banks.

Among the highest EM credit ratings

Total Chinese sovereign bonds outstanding amount to USD2.18 trn, roughly 50% of Chinese GDP. China accounts for 36% of total EM sovereign bonds in local currency outstanding, although the Chinese market remains much smaller than the US Treasury equivalent (USD15.9 trn) . The low central government debt-to-GDP ratio, stable governance and robust economic growth mean that the overall rating for Chinese sovereign debt in local currency (A+ on average) is the highest in the EM universe and close to that of developed-market issuers such as Ireland. Investors assign a relatively low default risk to Chinese government debt compared with other EM issuers, as can be seen in the low credit default swap (CDS) spread. 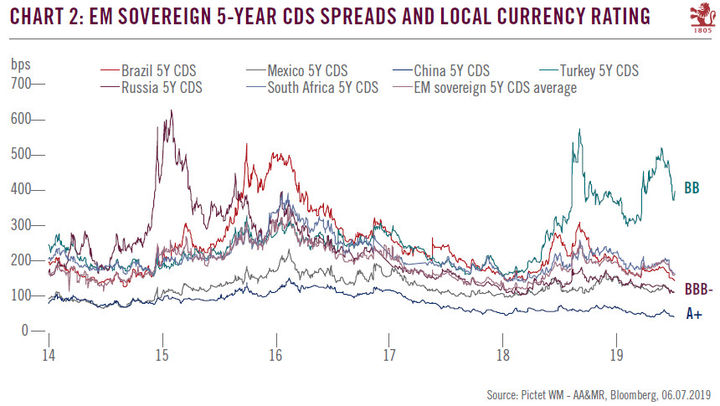 Today, Chinese real yields are relatively lower than their EM peers’, but fare fairly well compared to developed-market counterparts’: low inflation means that the real yield on Chinese sovereign bonds stood at 0.6% at the end of June, higher than the real yield on US Treasury bonds, which has fallen to 0.1%. Chinese sovereign yields tend to be influenced by both the PBoC’s monetary policy and the direction of US Treasury yields (due to the loose CNY/USD peg). We expect Chinese sovereign yields to fall this year as the PBoC continues to ease policy to sustain Chinese growth. This would mean a reversal of their recent rise this spring stemming from downward pressure on the renminbi.

The main risk investors must monitor is further renminbi depreciation against the US dollar. However, we believe that the Chinese authorities will continue to tightly manage the renminbi. Although it could remain subject to downward pressure in coming months, for now we believe the USD1/CNY7 level is a line in the sand.

Nonetheless, should downward pressure increase drastically, the Chinese authorities could resort to tighter capital controls as they did back in 2015-2016. Despite reassurances that they would allow foreign investors to repatriate their money and convert it back into their reference currency, the risk nevertheless exists that the Chinese renege on their engagements, leaving foreign investors stuck with renminbi in China. Finally, a look at quarterly turnover data suggests the Chinese sovereign bond market is relatively liquid, although less so than its US Treasury counterpart. Chinese liquidity will face a critical test as the market opens up to foreign investors, especially to fund managers who sometimes place large tickets.

Overall, however, we believe the opening-up of the renminbi-denominated bond market represents an opportunity. Sovereign Chinese bonds have a place in investors’ portfolios, as they offer attractive yields for relatively limited risk.