“A mountain has a summit, an end in sight. But for children fighting cancer, the end is not distinct. So, you keep pedalling…”

In September Grégoire climbed 16 mountain passes with 17.000m elevation gain over 6 days to raise money for ARFEC. It was the second time he’d done it. This is his story…

“I always knew I would give back to this group who had given me and my family such immeasurable support.”

In 2014, just after Christmas, Grégoire’s six-year old son was diagnosed with leukaemia. For the next three and a half years, his son underwent intensive treatment. The first six months, the family spent their life almost entirely in a vacuum of hospital waiting rooms. The one beacon was a weekly coffee and pastry morning shared with other families from the paediatric oncology ward organised by the ARFEC (Association Romande des Familles d’Enfants atteints d’un Cancer*). A moment of reprieve to share stories, tears, milestones or just talk about the weather.

“The association was originally founded by parents who wanted to offer support to other parents going through the same experience. I always knew I would give back to this group who had given me and my family such immeasurable support.” The idea to give in return was planted on one of the many early morning or evening rides Grégoire cycled during his son’s treatment. “It was a way for me to process what my family was going through.”

In late spring 2020, with his son in remission and the weight of his illness behind them, Grégoire had an idea. He would use his passion for cycling to raise money. Having spent the last few months on a stationary bike in his basement to avoid any contact with the coronavirus, Grégoire planned an extraordinary 800km trip across Switzerland from Müstair, Graubunden to Geneva through the Swiss alps. In September he set out and raised an impressive CHF 6'700. This amount corresponds to 445 meals or 335 nights for parents of hospitalised children, or 12 places in summer camp for sick children and their siblings. 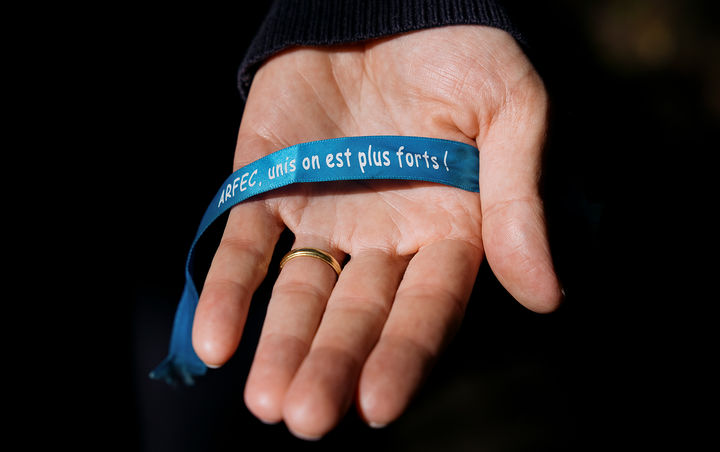 “I tied the ARFEC ribbon 'united we are stronger' to my handlebars, as a gentle reminder.”

“It was all a bit of a miracle honestly. I had not trained sufficiently outside nor with the elevation gain I would undertake. The itinerary was very much emotionally driven! I made it thanks to the unfailing support of my colleague François Junod from my team at work who decided to follow my journey by car and some close friends who cycled with me for a couple of days each. I knew I had to do it again in 2021.”

This time, with closer attention to kilometres and elevation gain per day, Grégoire plotted his 2021 expedition. During Septembre en Or (a month of paediatric cancer awareness building), he climbed 16 mountain passes with 17’000 metres in elevation gain, cycled 830km from Davos to Geneva in 6 days. Two friends, Dominique and Cédric cycled with him for the entire journey. Two more parents joined them in Bern for the last stage. François, François’s dad and Dominique’s wife drove ahead by car, keeping an eye out for bad weather or showing up with a change of t-shirt and snacks after a particularly tough climb.

“You fall into a rhythm and get to know your fellow riders’ form. Some mornings your legs are like cement, other times you feel invincible. There were some really tough climbs. How do you keep going? Well you tell yourself the mountain has a summit, an end in sight. But for these children who’re fighting cancer, the end is not so distinct. So, you keep pedalling. The children are the real warriors.”

He likens his cycling journey to his son’s battle with cancer. “We ride this series of passes and valleys without respite, climb after climb, adapting to the elevation, to the whims of the weather, without knowing the difference in elevation or what difficulties lie ahead. Throughout the long and winding route, we have companions that come and go along the way.”

Six days after the start, Grégoire and his friends rolled into Geneva to a cheering crowd of supporters, family and friends organised by the ARFEC. “Support, teamwork, sharing, friendship and family encapsulate the work of ARFEC, an association of families for families, a daily support for everyone. It is my chance to support them.”

For 2022 he’s planning a shorter trip, again during Septembre en Or and a longer trip planned for 2023 Nice to Geneva via Piedmont and French Alps.

When Grégoire is not enjoying time with his family and cycling, he is a System Administrator in Tech&Ops.

*Association for families of children with cancer in Romandie