“That’s not a knife, that’s a toothpick for a grizzly” – Sylvie

Nature is the only place where Sylvie finds peace. And over the years she’s travelled great lengths to find that inner harmony. After observing marine and terrestrial life in the Galapagos, Tanzania and the Azores, Sylvie found herself nose to nose with a grizzly mama bear in Alaska...

Sylvie in Geneva in November 2021.

“I was just behind my friend who stood frozen. He was trying very hard not to look the bear in the eye. I had my small camera on my wrist and I just snapped thinking ‘well that’s the last photo I’ll ever take’.”

When most people with a desk job say they enjoy spending time in nature, one imagines some hiking and camping at the weekend, maybe a bit of ski touring in winter. For Sylvie, spending time in nature means total immersion. Sleeping in the trees in the Serengeti to better observe animals at the water hole while an elephant scratches its back on the very tree she is perched in. It means diving 1500km offshore in the middle of the Atlantic ocean because this is the best place to watch sperm whales as they migrate northwards.

Sylvie grew up in the jungle that was urban Paris in the 70’s. Her first encounter with an animal any larger than the building’s stray cat was at the Jardin d’Acclimatation zoo where they kept a large brown bear cooped up in a cage too small for his size. “There was also a polar bear. I remember feeling very sad and a bit uncomfortable and just wanting to go home. All these people watching these miserable animals just upset me.”

Sylvie moved to Switzerland in 2005 to join Pictet and discovered that her inner ‘urban animal’ was really quite content living closer to nature.  Five years later a health scare caused her to rethink her priorities. “I was diagnosed with mercury poisoning, and although I never stopped working, I had this deep yearning to go back to a simpler life and immerse myself in nature.” 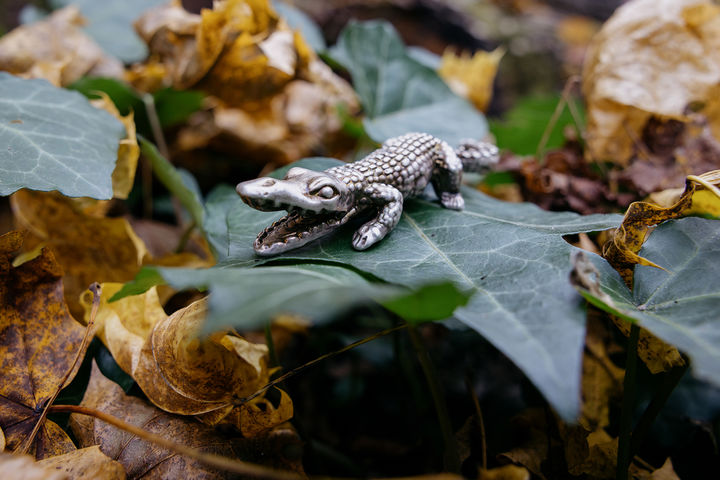 So after swimming with iguanas, sea lions, whales and walking with the grizzlies, what is next? “Maybe crocodiles, but I’m still a little scared…!”

So began her trails off the beaten track. First Alaska to watch killer and humpback whales and then the Galapagos for the extraordinary biodiversity. Next up was Tanzania and then on to Alaska and the Azores. “There’s a real sense of freedom, of excitement, fear, total ecstasy when watching animals in their natural habitat. We are in their world. Each animal has its place. And each respects that space. For me it’s a moment of absolute peace, to just watch, contemplate; the colours; the light; the feathers of the birdlife; or the organisation of a baboon family.”

One of her most memorable trips began – as these things happen – over dinner in 2017. “A nature photographer friend told us about his upcoming expedition to the Kodiak Archipelago of Alaska and that he’s looking for people to make up the numbers on a yacht with very basic facilities (no shower!) he had just chartered. Well, obviously I said yes!” The plan was to fly into Anchorage and then use Kodiak Island as a base from which to explore the archipelago, known for its wildlife, particularly during the salmon run (when salmon swim back upriver to spawn) when grizzly bears and bald eagles come to feast.

Before meeting up with her fellow cabin crew, Sylvie wandered into a local sporting goods store in Anchorage thinking it might be an idea to have some protection. “When I told the sales guy where we were going, he laughed at me. Pointing at the knife I’d selected, he said “what you have there is a toothpick for a grizzly”. Sylvie left the store with a highly toxic “pepper spray for bears” capable of permanently blinding humans (and presumably of sufficiently confusing a grizzly to allow her to run to safety) instead. And her intuition was spot on.

After various mishaps with weather, Sylvie and her friends are dropped off by seaplane on Domestic Island 90 minutes flight from Kodiak with clear instructions to be back ‘here’ at 4pm for the return trip. The group of eight set off enthusiastically across the wilderness carefully keeping in a star formation “to make the group look bigger to a grizzly than we really were”.

Out of nowhere, a group of 30 grizzly bears appeared next to them. They were strolling casually down the river. And then one bear stopped. “I was just behind my friend who stood frozen carrying 25kg of expensive photography equipment with no place to run. Or move. He was trying very hard not to look the bear in the eye. I had my small camera on my wrist and I just lifted it and without seeing what I was doing I just snapped thinking ‘well that’s the last photo I’ll ever take’.” Thankfully it wasn’t and the bears moved on, leaving Sylvie and her friends with hearts pounding and feeling giddy with relief.

“It was stupid honestly. Being on an uninhabited island, with no experience, no ranger, no gun, no cell phone reception. What saved us was the amount of salmon in the river that year! The bears were distracted. And well-fed. They carried on past us and we crept off back to where we’d landed.”

The following year Sylvie met her partner who has two small children so her holidays have become more domesticated but she still returns to her little piece of nature every summer: “We go to a place in Corsica, where turtles breed naturally on the beach. And no, I won’t tell you where it is because I don’t want anyone to know about it!” So after swimming with iguanas, sea lions, whales and walking with the grizzlies, what is next? “Maybe crocodiles, but I’m still a little scared…!”

When she’s not exploring the wilderness, Sylvie is a Senior Investment Manager for Thematic Equities at Pictet Asset Management in Geneva.