15 December 2020 - Marine stepped out onto the football pitch in the Metropolitano stadium in Madrid to bright lights, loud music and cheering. This was the dream and she was living it. But how did the banking operations intern from a rural village outside Geneva find herself playing in the UEFA Women’s Champions League?

“It was magical. Playing in the Champions League is the ultimate dream. That’s what you train for. And we were treated like royalty, it was like they do for the men’s games: private jet, VIP service, full security. We don’t normally get that!”

It turns out Marine has spent most of her life being the only woman in a man’s world. “I played judo competitively as a child for 9 years. Girls and boys compete together until 12 years old. At some point, strangulation is allowed. Suddenly it became more about power and force than skill. It was no longer a game I wanted to play.” Watching her little brother on the pitch in Terre Sainte inspired Marine to take up football with a local junior boys’ team. Just five months later at 14, she was recruited to join the Team Vaud football team to play on a national scale.

At Team Vaud, she played for the Swiss team under 15s, 16s and under 17s, travelling to Poland, Spain, Holland and Israel for the European Championships in 2016. “You could be anywhere, going from the hotel to the football pitch and back again. I did most of my sightseeing watching the countryside change out the bus window!”

For the next three years Marine’s life was a whirlwind and a constant quest to balance schoolwork, training four times a week and travelling. “It’s not like in the US where athletes are schooled on the road. My school didn’t really accept that I spent all my free time training and travelling to games. My football club didn’t really accept that I had school work to catch up on. I had to find my own discipline to get it all done.” 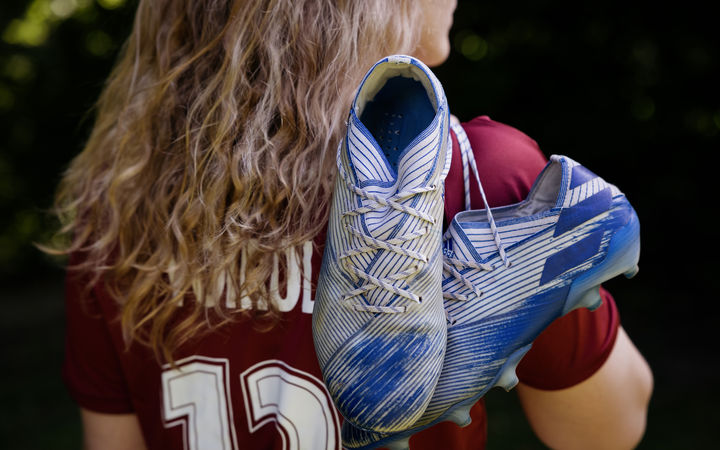 Marine won the Swiss Women’s Super League championship this May!

At 18, just as the selections were being made for the national teams, Marine tore the internal ligaments in her left knee and was relegated to the bench for 12 months. “If I’m honest, I needed the break. Training had become a bit routine and I’d lost the enjoyment. It was good to take the time to recuperate, focus on my school work and get some perspective.” She returned to the pitch at the beginning of 2019, taking a step down and joining Servette FC League B. “I rediscovered the love of the game, I am surrounded by supportive team mates, we train four nights a week, there’s just a little less pressure.”

And that is how in December 2020, Marine found herself playing against FC Atletico Madrid in the Estadio Metropolitano. “It was magical. Playing in the Champions League is the ultimate dream. That’s what you train for. And we were treated like royalty, it was like they do for the men’s games: private jet, VIP service, full security. We don’t normally get that!” The reality is that while they train just as hard as the men, women’s football gets very little visibility. “It’s starting to change but there is a real disparity. You can’t live off a pro footballer’s salary on the women’s team for example. We all have day jobs. Unimaginable for the men’s team right?”

Back in Geneva, balancing banking, training and studying, what is next? “For now I’m really enjoying my apprenticeship in reconciliation in banking operations at Tech&Ops. I’ve always been interested in finance and investing, what makes markets go up or down. And I’m learning a lot on the field from my more experienced team mates. We won the Swiss Women’s Super League championship this May! Every tournament we win helps to shine the spotlight a little brighter on women’s football.”

When she’s not training or winning championships, Marine is following an apprenticeship in the Funds and Custody fees & positions team in Tech&Ops.