The long and winding road to Brexit

Uncertainty remains high, with outcomes that could have consequences beyond the UK.

“Our base-case is that the British Parliament ultimately approves May’s divorce deal, or at least an amended version of it.”

Having secured formal approval of the divorce deal from EU leaders on 25 November, Prime Minister Theresa May now faces the far bigger challenge of securing UK parliamentary approval by mid-December. Both political and economic uncertainty could remain elevated until the 29 March deadline.

The tail risk of a no-deal Brexit on 29 March remains high, although there is still room for alternatives, including an extension of the March deadline if new elections are called. There could also be a second parliamentary vote on the divorce deal. Although there is considerable uncertainty, our base-case scenario is that the British parliament ultimately approves May’s divorce deal (or at least an amended version of it), and that we thereby avoid a ‘no deal’ outcome with a disorderly exit.

Our central scenario is that upcoming political uncertainties are likely to limit the Bank of England’s ability to raise rates more than once in 2019. Based on our core scenario, our three-month forecast for sterling is USD 1.27, with potential downside risk in the short term. We forecast that sterling will recover to USD 1.35 on a six-month basis and USD 1.37 on a 12-month basis. 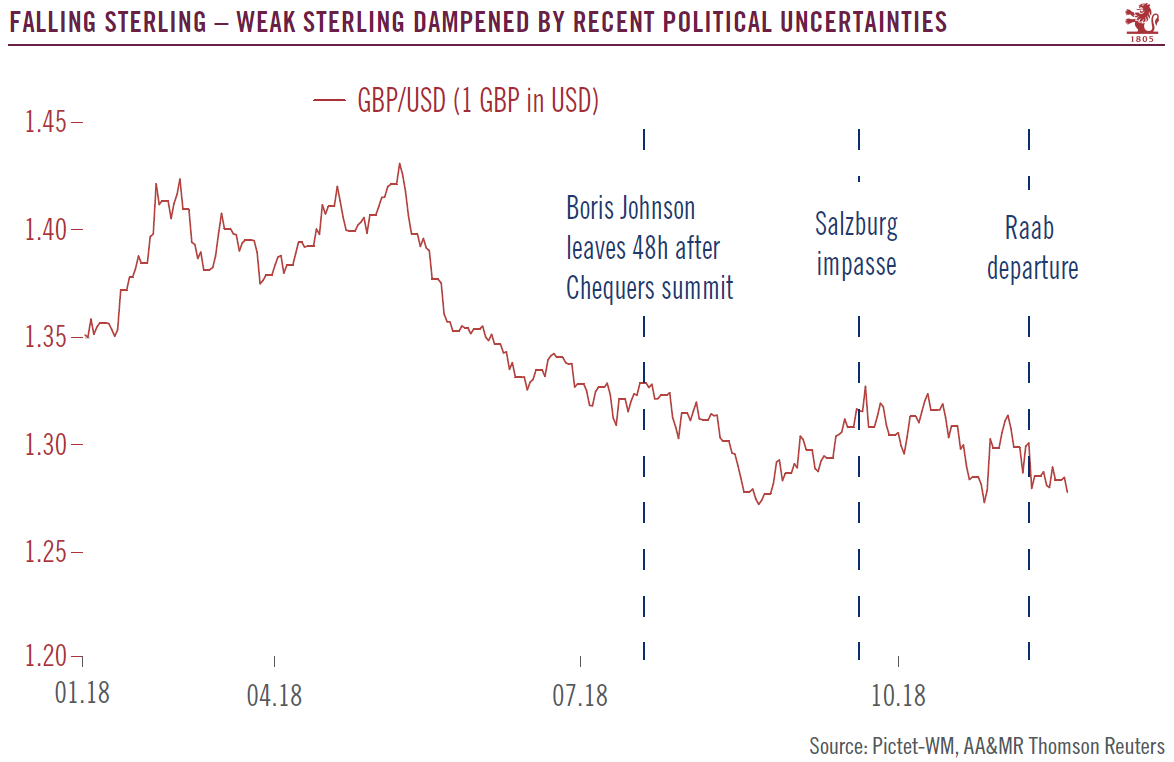 A weaker pound could prove supportive for UK equities. The wide international footprint of the largest UK-based companies could serve as a buffer from domestic UK issues. Moreover, while their cost base and profit reporting is sterling-skewed, their sales are not. Over 75% of revenues of UK-based large-cap companies come from overseas. Therefore, the weaker the pound, the stronger their reported profits.

Our central scenario is that Theresa May manages to push a deal through the UK parliament. However, risks of a “no deal” outcome are high. We believe that parliament will approve the deal, and that if not, an extension to the Brexit deadline will be implemented.