Blind-sided by Omicron and a hawkish pivot from Powell, markets have been weathering volatility as they grapple for visibility, trying to ascertain the potential impact of a new Covid variant as the Fed considers accelerating its asset purchase taper on account of more persistent inflation pressures and a tightening labour market (and the implications for the rate-hike trajectory). The fundamentals remain sound and there are a number of tertiary tailwinds in play, but in the short term we expect the volatility to continue: it remains to be seen whether seasonal trends and the ongoing buy-the-dip mantra can hold as we await further visibility on Omicron and central bank policy. All eyes on inflation numbers Friday and the Fed next week.

Since our last update, Europe's score in our equity regional matrix (the top-down indicator that gives us a regional view*) remains in ‘very bullish’ territory, at 43% (up on 33% a month ago). Sentiment is down a little (now -17% from -13%) yet the economics score has vastly improved (100% up from 17%). Trend has deteriorated as one might expect given recent volatility (to 53% from 86%) while the region’s valuation score has climbed (2% to 31%). Unlike the Fed, the ECB remains cautious in tone, Lagarde reiterating again last week that she does not expect a rate hike next year, although the strong inflation numbers as well as rising Covid cases will complicate the bank’s deliberations about its asset purchase programmes as the 16 December meeting approaches (we continue to expect it to end “PEPP” in March and increase the regular “APP”). Macro tailwinds include a shift in favour of more fiscal flexibility implied by the new coalition in Germany and the European Commission’s review of the Stability and Growth pact. As is the case globally, Covid-19 remains the clear threat to the otherwise encouraging economic data – the flash composite PMI print of 55.8% in November releasing before the bombshell of Omicron landed on top of what was already proving a challenging Delta surge. Our economists are sticking with their euro-area GDP growth forecast of 5.0% in 2021 overall and 4.5% in 2022, and while volatility may be the only certainty over the near term, we still think Europe can attract investors seeking out value plays exposed to the cycle, and as well as energy plays and financials we also continue to like green infrastructure, and European luxury. See the latest iteration of our European long-only selection here.

The US’ regional score has over the past month climbed from a ‘bullish’ 20% to a ‘very bullish’ 35%. Recent volatility has caused the trend score to come off slightly (from 82% to 78%) while the valuation score has crept a little higher from -75% to -68% (albeit still ‘extended’). The liquidity score has fallen from 100% to 83% while the economics score has jumped from 50% to 100%. While not entirely unexpected by the markets on account of the evident persistence of inflation pressures, Powell’s hawkish pivot nonetheless threw a cat among the pigeons coming so shortly off Omicron’s designation as a variant of concern; however evidence of firm wage growth also supports the likelihood that a faster taper will be announced at the upcoming 15 December meeting (leaving the door open to a first rate hike in June). In the meantime markets will be watching Friday’s November CPI data closely. We expect markets to remain volatile yet resilient; the fundamentals remain strong, the test being whether (retail in particular) investors can hold their nerve as policy support starts to be withdrawn. Medium term, we think the 10-year US Treasury yield can take up its steady rise again, and expect to see investors seeking out quality names across the cyclical sectors – in an environment that will increasingly favour the more selective. See our US long-only selection here.

Japan has pushed further into ‘very bullish’ territory, its regional score climbing from 45% to 56%. Trend has pared back to 3% from 10% yet valuation has ticked up to an even more attractive 85% from 75%. The BoJ has already scaled back on asset purchases while a new fiscal package next year could help domestic demand recover, however for the time being we continue to prefer the country’s exporters as beneficiaries of the global recovery (the weaker yen a tailwind) as well as quality cyclicals in the region.

Emerging market equities have managed to climb out of very bearish territory to bearish (from -34% to -21%), the trend score clawing back a little from -94% to 85%. In China the PBoC has announced another rate cut and is in our view likely to keep conditions loose as the property sector is re-structured, however we remain cognisant of the ongoing regulatory changes (while Didi’s recent de-listing recently sent shockwaves through the ADR market) and would remain cautious and very tactical in the region; there remains also the potential impact of zero-tolerance in the face of Omicron.

Since the Fed’s September meeting we have seen the momentum in the US 10-year Treasury yield pick up again, yet it retraced slightly following the November taper announcement, and now within the market volatility it has fallen below its 200-day moving average. While the consolidation could continue towards 1.27%, should this level hold it could pick up again to the next technical hurdle at 1.8650% (the 50% Fibonacci retracement of the entire bearish sequence). Longer-term it remains the case that inflation break-evens should ultimately stabilise as supply issues fade and real rates start rising again.

Source: Factset - Pictet Trading Strategy – as of 06.12.2021 *criteria are explained in the endnotes The target price presented in the chart is based upon chart analysis. This is not the product of any Pictet financial research unit 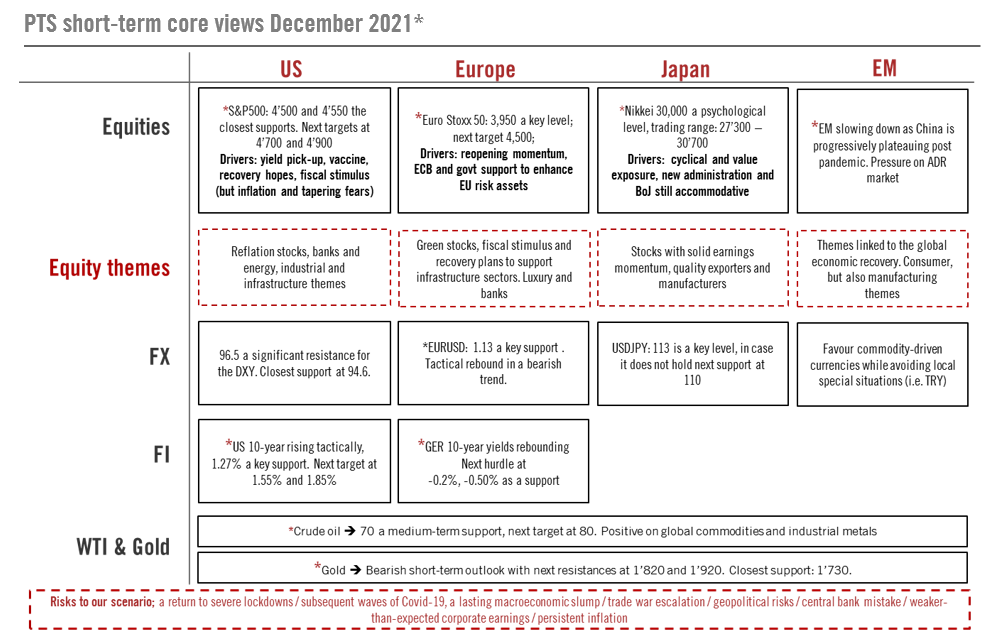 Source: FactSet; Pictet Trading Strategy – as of 4/11/2021 *The target prices presented are based upon chart analysis. This is not the product of any Pictet financial research unit.