True to form, September brought with it more volatility as peak macro and earnings growth concerns combined with supply chain problems weighed on equity markets searching for another catalyst. More recently, talk of policy tapering, inflation, and now energy concerns have rekindled momentum in the 10-year US Treasury yield, which should support a pickup in the more cyclically-exposed so-called ‘reopening’ trades: a rotation that we expect to support equities into the end of the year (even if the spectre of stagflation could undermine this in the short-term).

Since our last update on 14 September, Europe's score in our equity regional matrix (the top-down indicator that gives us a regional view*) slipped back into bullish territory (to 27% from a ‘very bullish’ 37%). The trend score has fallen to 53% (from 76) while Sentiment has come off a little (-17 from -6%, while the valuation score has risen slightly (from 0% to 5%). While the ECB’s governing council has announced a moderate reduction in the pace of emergency asset purchases it remains very cautious in tone, while staff projections were revised up in the September meeting: GDP growth for this year up to 5.0%, from 4.6%. We continue to expect momentum to pick up in the latter part of the year, as it attracts investors seeking out value plays exposed to the cycle. See our recent letter here on why we still like Europe, and see our European long-only selection here.

The US’ regional score has crept higher within bullish territory to 27% from 18%. The trend score has also risen slightly (from 72% to 78%), and while the region’s valuation score has shifted slightly from-78% to 75% it still appears ‘extended’ on an historical basis. The liquidity score is now up at 100% while the economics score has improved from 17% to 33%. The sentiment score remains steady at -28%. 38%). Having been stubbornly low throughout the summer, a more hawkish Fed and talk of taper has over recent days resulted in a rebound in the 10-year US Treasury yield which could be good news for the so-called reflation trades. We also see opportunity to seek out entry points among industrials and we would not overlook infrastructure. Either way, such trades are becoming. See our US long-only selection here.

Japan’s regional score in our matrix has since mid-September risen from a bearish -20% to a bullish 12%, with trend climbing from -17% to -1% and the valuation score climbing from 61% to 70% and liquidity now at 100%. Having swung to -92% our contrarian sentiment indicator for Japan has now pared back from the extreme -92%  to -47%. We continue to prefer the country’s exporters as beneficiaries of the global recovery, as well as quality cyclicals in the region.

Emerging market equities remain in very bearish territory the regional score however creeping up to -28% from -38% last month. The trend score has recovered deteriorated a little again to -86% from -75%, while the economics score has risen from 13% back up to 33%. August). We remain cautious in the near term in light of the recent regulatory changes and corporate liquidity events (Evergrande) in China and we would continue to take a more selective, tactical approach to EM for now.

On the macro front the 10-year US Treasury yield over the summer fell through support at around 1.15% and spent some time trying (and failing) to break back above its 50-day SMA 1.30%. However since the Fed’s September meeting we have seen the momentum take up again. Our core technical scenario is a short-term limited rise on towards the resistance level at around 1.55%. Inflation break-evens should ultimately stabilise as supply issues fade and real rates start rising again.

Source: Factset - Pictet Trading Strategy – as of 04.10.2021 *criteria are explained in the endnotes The target price presented in the chart is based upon chart analysis. This is not the product of any Pictet financial research unit 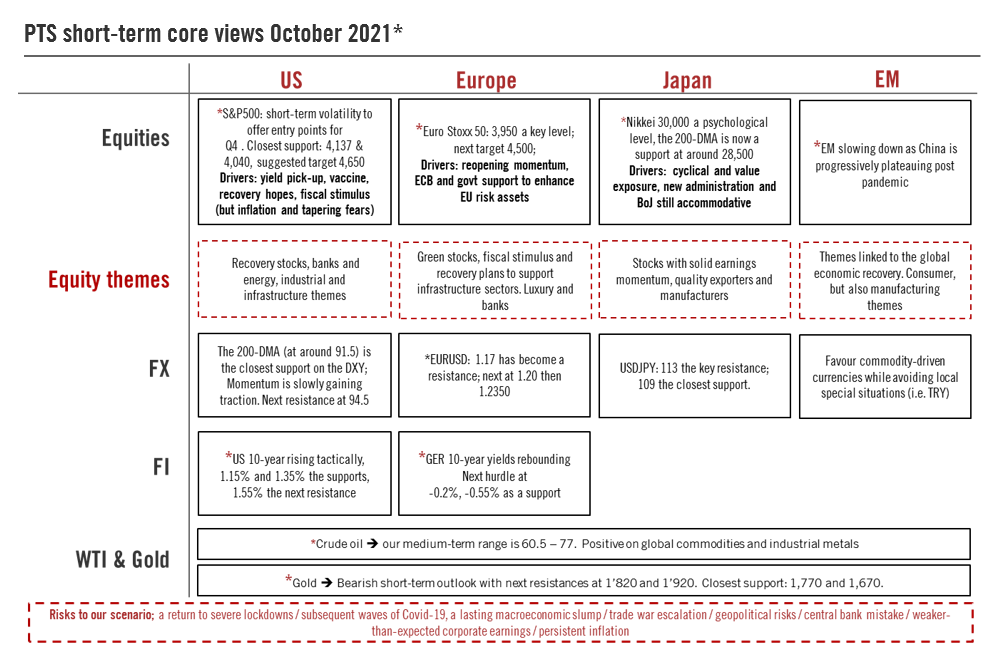 Source: FactSet; Pictet Trading Strategy – as of 4/10/2021 *The target prices presented are based upon chart analysis. This is not the product of any Pictet financial research unit.