Over recent weeks we have been discussing how in our view an apparent normalization in economic expectations and sentiment represents a healthy recalibration in markets as the Covid-19 recovery matures. It is also our view that while volatility might remain during what is a seasonally choppy period and given the recent spate of disappointing data, the growth and earnings outlook remains robust and moreover some better news could support a return to risk, lift 10-year yields and encourage a rotation back in favour of the more cyclically-exposed, recently unloved yield-sensitive corners of the equity market, and potentially drive performance into a year-end rally.

Since our last update on 16 August, Europe's score in our equity regional matrix (the top-down indicator that gives us a regional view*) has climbed back up into very bullish territory to 27% from 26%. Sentiment has continued to improve, as has the liquidity score, and while the trend score has softened a little more, our indicators suggest that valuations have become less challenging (now bang on 0); On a regional basis, monetary policy, the economic picture and the pandemic outlook all now appear to paint a more enticing picture for Europe than the US. The ECB’s governing council  has announced a moderate reductions in the pace of emergency asset purchases but remains very cautious in tone, while staff projections were revised up in the September meeting, GDP growth for this year to 5.0%, from 4.6%. We continue to expect momentum to pick up in the latter part of the year, thereby attracting with it investors seeking out value plays exposed to the cycle into the end of the year. See our recent letter here on why we still like Europe, and see our European long-only selection here.

The US’ regional score has crept higher within bullish territory from 13% to 18%. The trend score has slipped a little (from 84% to 72%), and while the region’s valuation score has shifted slightly to -78% from -80% it still appears ‘extended’ on an historical basis. The liquidity score remains unchanged at 83% as does the economics score at 17% while our (contrarian) sentiment score has also continued to creep upwards (now at -28 from -38%). The summer market featured a 10-year yield that in spite of recent efforts to rebound remains stubbornly low, with an S&P 500 grinding higher on frequent sub-surface rotations. We are now pushing through a seasonally challenging time of year while indices are looking extended, yet the technical outlook supports the possibility of a rally into the end of the year (see our year-end technical view here ) - although we need to see some more sustained strength return to the 10-year yield if we are to see a sustained rotation back in favour of the more cyclically-oriented value trades Either way, when hunting for remaining value, quality is becoming increasingly relevant with such strategies now more nuanced. See our US long-only selection here.

Japan’s regional score in our matrix has since mid- August dropped from a neutral -7% to a bearish -20%; although the trend score has recovered from -99% to -17%. The valuation score has come off a little (now at 61% from 78%) while liquidity remains at 88%. Of note is that our contrarian sentiment indicator has seen an extreme swing to  -92% from 49%. We continue to prefer the country’s exporters as beneficiaries of the global recovery, as well as quality cyclicals in the region.

Emerging market equities have crept further into very bearish territory the regional score now at -38% from -34% last month. The trend score has recovered slightly from -90% to -75% while the economics score has fallen from 33% to 13%. We remain cautious in the near term in light of the recent changes in China (see our recent letter on the topic here) and would continue to take a more selective, tactical approach to EM for now.

On the macro front the 10-year US Treasury yield has over the summer fallen through support at around 1.15% and has since been trying to break back above its 50-day SMA 1.30% again. Our core technical scenario (albeit recently challenged) remains a short-term limited rise on towards the resistance level at around 1.55%. Inflation break-evens should ultimately stabilise as supply issues fade and real rates should start rising again as Fed taper talk gathers momentum.

Source: Factset - Pictet Trading Strategy – as of 14.09.2021 *criteria are explained in the endnotes The target price presented in the chart is based upon chart analysis. This is not the product of any Pictet financial research unit 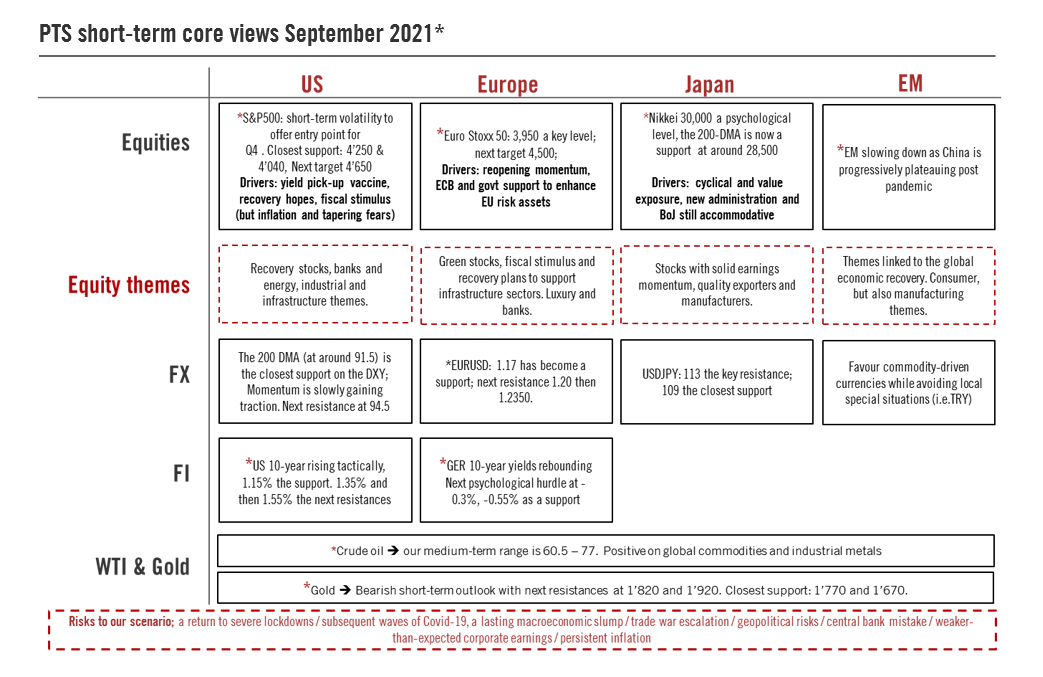 Source: FactSet; Pictet Trading Strategy – as of 13/09/2021 *The target prices presented are based upon chart analysis. This is not the product of any Pictet financial research unit.