“We give our staff, who include 37 nationalities, a platform to make things happen so that our guests have wonderful experiences when they stay with us.”

This independently managed, family-owned hotel in the City of Basel attracts guests from all over the world for its luxurious accommodation, its superb restaurant with three Michelin stars, and its talented staff team offering superior service.

The Grand Hotel Les Trois Rois, which sits on the Rhine in the historic centre of Basel, is one of the oldest city hotels in Europe. The first record of The Three Kings dates back to 1681 when it was described as an inn for gentlemen. Rebuilt in 1844 in Belle Époque style, it was redesignated as a Grand Hotel, and began to attract distinguished guests from the worlds of politics and the arts. 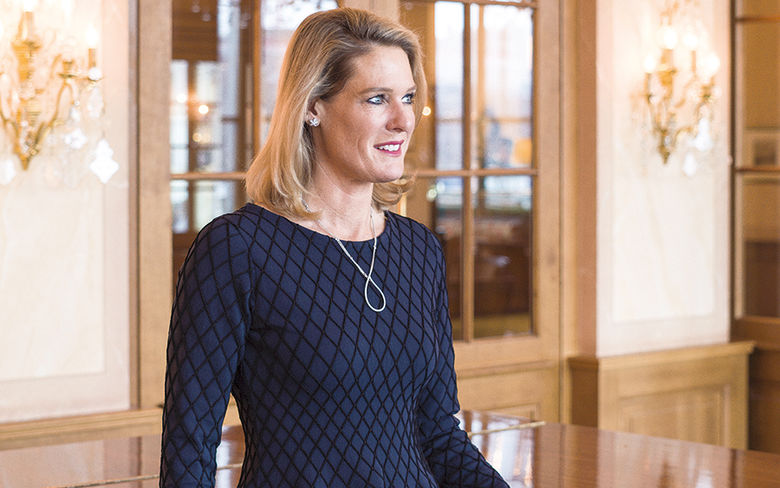 Over the next 160 years, Les Trois Rois was run by a succession of owners, some of whom sold off parts of the building. In 1936, its owners started to appoint professional directors to run the hotel which underwent many partial renovations. It was sold in 2004 to the Swiss entrepreneur Dr.h.c. Thomas Straumann, founder and chairman of a market-leading dental implants business.

Dr Straumann immediately closed Les Trois Rois for 20 months to carry out a comprehensive renovation which restored the 1844 heritage and fitted the hotel out with a luxury infrastructure for its 101 rooms. This included opening the Cheval Blanc, a restaurant which now has three Michelin stars – one of only three restaurants in Switzerland to have been recognised for such excellence.

Now equipped to be one of Switzerland’s foremost hotels, it has achieved a five-star superior rating and membership of the select group of 40 five-star superior Swiss Deluxe Hotels which meet strict quality requirements. It is also a member of Leading Hotels of the World, a New York-based group which represents more than 400 exceptional hotels in over 80 countries.

‘Mr and Mrs Straumann have invested substantially in the hotel, and are very involved in its operation,’ says Tanja Wegmann, General Manager. ‘Four times a year, they have a breakfast to meet new employees and introduce themselves. We give our staff, who include 37 nationalities, a platform to make things happen so that our guests have wonderful experiences when they stay with us.

‘There are so many five-star hotels and my vision is that everyone working here should be a host. When our guests leave the house, I want them to say that not only is the hotel an amazing place, but also that it has the best team. We are an independently managed, family-owned hotel, and we are Les Trois Rois family.’ 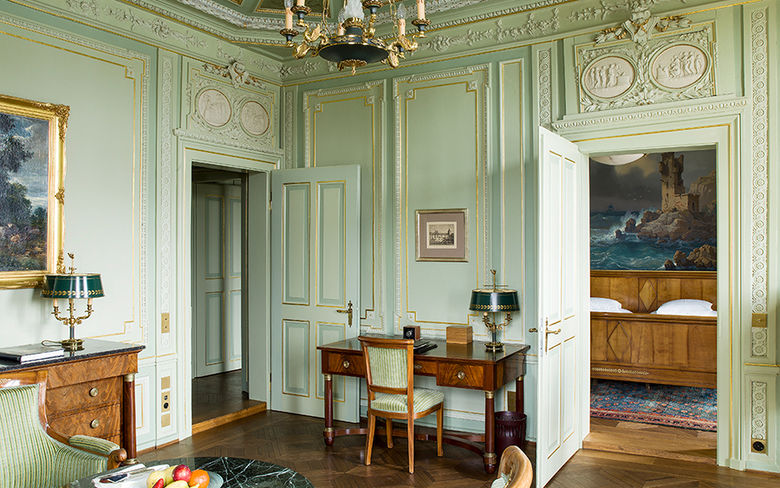 “We have lots of projects to take advantage of the potential of digital for hotels such as ours. We have to be innovative to stay relevant in this world.” Tanya Wegmann, General Manager

The location of the original inn was close to the main water and overland trade and travel routes across Europe. It was beside the Middle Bridge, known as Mittlere Brücke, which was one of the first bridges over the Rhine, and ships on the river could load and unload at the neighbouring landing place. The Three Kings name was a popular one for inns and taverns near trade routes – a reference to the three wise men from the Orient who visited Bethlehem after the birth of Jesus and brought gifts of gold, frankincense and myrrh.

Before Les Trois Rois became a Grand Hotel, it hosted meetings and family events for the landed gentry and aristocracy, as well as important state receptions. One notable event was a grand banquet for General Napoleon Bonaparte as he was travelling back from fighting in Italy in 1797 – it has been dubbed the inn’s first business lunch. A large room is named after him, though he never slept in it.

The transition to a Grand Hotel came about after a wealthy master tailor called Johann Jakob Senn acquired the estate in 1842, tore down the old buildings and commissioned a Basel architect to build a new hotel. After it reopened in 1844, it attracted many famous guests, including in 1897 the Austrian author Theodor Hertzl, the Zionist who laid the foundations for the creation of the state of Israel.

“People who travel a lot like to stay in Swiss hotels because they know that the standard of service, the quality of the food and drink, and the welcome are top class.”

As part of the 2004 renovations, Dr Straumann bought back the parts of the site which had been sold in earlier years. In addition to providing more rooms, a large ballroom was built in Belle Époque style which has provided space for parties, conferences and other events. The hotel also caters for events at clients’ homes and other venues outside the hotel. And it owns a beautiful flower boutique called Fleurs des Rois in the City’s market place.

Since Les Trois Rois reopened in 2006 after its renovations, business has been brisk. Particularly successful has been the Cheval Blanc restaurant whose Chef de Cuisine Peter Knogl has won three Michelin stars and 19 GaultMillau points out a maximum of 20. Open five days a week outside holiday closures, it is always fully booked and attracts gourmets from around the world. The Brasserie Les Trois Rois with its Swiss and French brasserie specialities is always booked out, as is the Restaurant Chez Donati, the Hotel’s Italian restaurant five minutes’ walk away. 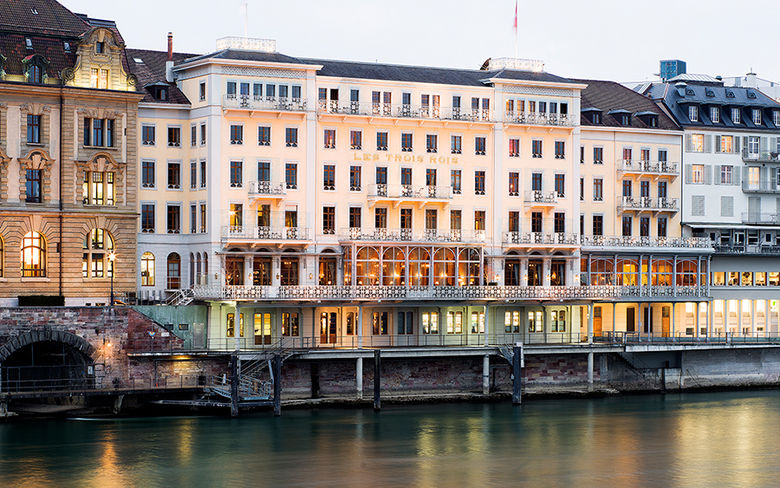 The Grand Hotel Les Trois Rois, Basel The hotel sits on the Rhine in the historic centre of Basel, and is one of the oldest city hotels in Europe. The first record of The Three Kings dates back to 1681 when it was described as an inn for gentlemen.

Tanja Wegmann attributes the success of Les Trois Rois to the international reputation of Switzerland’s hotels. ‘People who travel a lot like to stay in Swiss hotels because they know that the standard of service, the quality of the food and drink, and the welcome is top- class. We have great hotel schools in places like Lausanne and Lucerne which are famous for the quality of the hotel managers they produce.’

But she is aware that there is no scope to relax in a fast-changing industry, with the explosive growth of digital media. ‘That’s true for every industry, and we have lots of projects to take advantage of the potential of digital for hotels such as ours. We have to be innovative to stay relevant in this world.

‘We are always working to improve our communications with guests, and we have workshops for our leadership team to optimise processes such as staff recruitment, signing in guests, managing rooms and providing VIP services. And in a digital era, it is essential to respond to comments posted on social media very fast because they will be widely read. We work with IT specialists to get it right and to handle guest data safely.

‘We like to say that we are rich in history, young at heart – our teams are always open to new ideas. That is what the Swiss brand is all about: a country with a great history and with great people. Being in Switzerland is very important to our success.’ 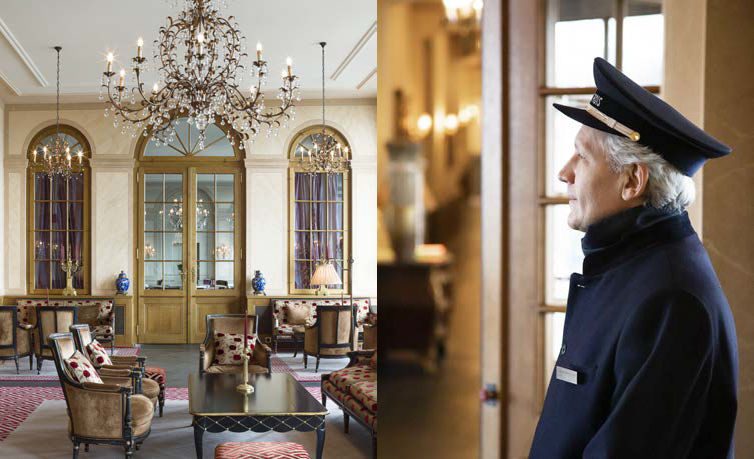