“Swiss manufacturing is synonymous with precision, quality and dependability and the modular furniture components are made with first-class materials to the finest level of craftsmanship.”

A Swiss hardware company created a stylish modular metal furniture system in the 1960s as a flexible storage solution to accompany its growth. It has since become a design icon in offices and homes around the world.

When USM, a leading Swiss manufacturer of iron products and window mechanisms, decided to build a new factory, it wanted to transform its manually oriented production plant into a modern industrial enterprise. It knew that its old-fashioned processes could not compete with companies that had already modernised, but the transformation had an unexpected consequence. Instead of continuing to make window mechanisms, the company ended up producing a modular furniture system that has become a modern design classic. 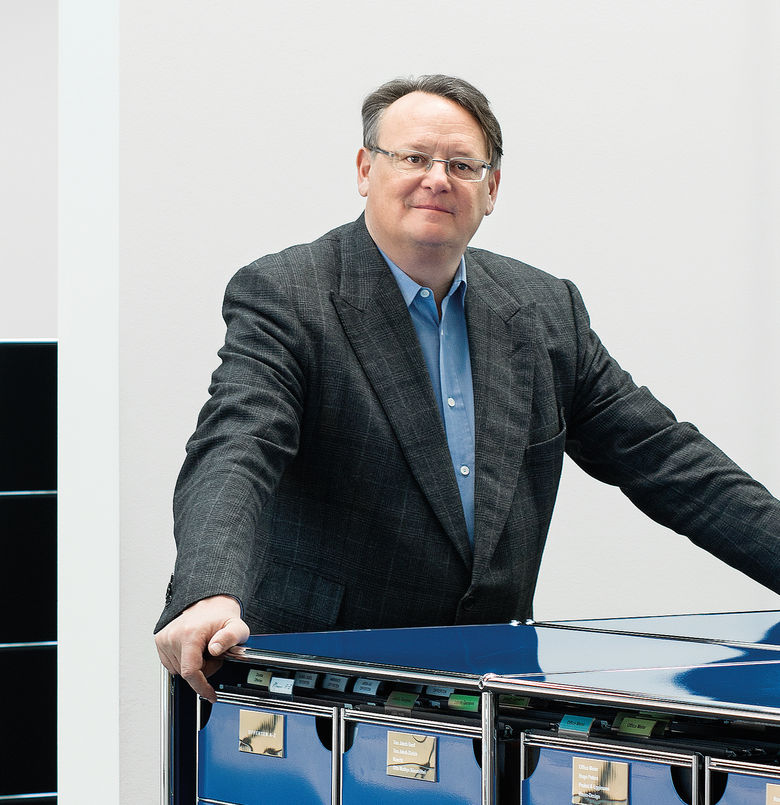 Alexander Schärer, CEO In 1963, we created a pioneering furniture product known as USM Haller Modular Furniture, sold at first for office use but later for home use, and now exported to more than 40 countries around the world.

USM is a family-owned business that was founded by Ulrich Schärer in 1885 as a hardware and locksmith’s business in Münsingen, close to Switzerland’s capital city of Bern. His grandson Paul Schärer took over the company in 1961 after studying engineering, and he realised that USM needed to build a larger factory to become more competitive. So he collaborated with architect Fritz Haller to realise his vision of a flexible factory built using a steel modular construction system that could easily be expanded as the business grew.

The new factory included a pavilion to house USM’s offices, and the two men wanted to design a furniture system that was flexible enough to adapt to a growing business when it needed more office space. In 1963, they created a pioneering furniture product known as USM Haller Modular Furniture, sold at first for office use but later for home use, and now exported to more than 40 countries around the world.

Alexander Schärer, Paul’s son, who joined USM in 1993 and led its foreign expansion, says there was an irony in this evolution. ‘The company intended to continue selling its window mechanisms to the architects who used them for the homes they built, while commercialising the new modular factory construction system. But the window mechanisms were less in demand as factory buildings became air-conditioned, as had its own. So the modular furniture, which was intended to be a by-product of the new building system, became the company’s main product.’

“The modular furniture, which was intended to be a by-product of the new building system, became the company’s main product.”

The system is not complicated: it uses three basic steel and chrome components: spherical joints, which connect tubes together; and support panels, which come in a variety of attractive colours. So elegant is the design that the USM Haller Modular Furniture has been included in the Architecture and Design collection of New York’s prestigious Museum of Modern Art (MoMA).

In 1969, the production and sale of USM Haller Modular Furniture began, with the first large contract signed for the headquarters of Rothschild Bank in Paris. This required substantial retooling to make the manufacturing profitable, but it had two important beneficial consequences: details of the new furniture were featured in architectural journals and caught the attention of architects; and a fashion show was staged in the bank, which attracted a lot of newspaper coverage for the futuristic furniture.

Potential customers were attracted to the pavilion on the Münsingen factory site to see the new furniture system, and USM started recruiting dealers to sell it. Outlets were opened in 20 Swiss cities, starting with Zurich, Lausanne and Berne. And in 1975, a German subsidiary was opened in Bühl to set up a similar dealer network to Switzerland’s.

“In Switzerland 90 per cent of our residential customers go for custom-designed pieces.”

The marketing in Germany focused heavily on offices at first, furnishing big banks, lottery companies and other businesses. But in 2008 when banks started collapsing in the financial crisis, USM sold more into the home market, which had already grown in Switzerland.

‘Offices often buy directly from the company, but home-owners tend to visit showrooms or go to dealers because their orders are generally smaller. Our website has a configurator section that allows buyers to create their own designs, though many residential customers turn to dealers for guidance to perfect them. In Switzerland 90 per cent of our residential customers go for custom-designed pieces.’

It is unusual for homes to be fully fitted out with USM furniture, he adds: residential customers tend to buy it just for parts of their homes, though the system’s flexibility means it can easily be expanded or changed if desired. However, he recalls that one wealthy client fitted out a full Chicago penthouse with the company’s products to provide a home for their artwork and memorabilia.

Business developments have led to changes in the ranges of modular furniture. Less filing space is needed in offices, for example, because much more information is now stored online. But there is more demand for partitions and landscaping for creative spaces and privacy in open-plan offices.

The USM business has three main production functions. The main one is manufacturing the modular components, which is all done at the Münsingen factory and employs just under half of the company’s 400 or so employees. The second function is assembly, which is done by around a quarter of the employees globally. A new company is being set up in Leipzig to do the assembly for all of Europe except Switzerland, where it is still done at Münsingen.

“USM remains a private company, and has no problem in raising funds when finance is needed. Decision-making takes much less time in a family business, which can be vital if restructuring or closing some operations is urgently required.”

The third function covers sales, marketing and distribution, which is done by around a third of the staff, working with a network of more than 400 qualified sales partners. The numbers have grown over the years, as projects for homes are typically smaller than those for offices, needing more people to support sales and the shorter delivery deadlines that residential customers expect. The margins on those smaller projects are better, however, and are likely to rise as the share of sales online increases.

One of the attractions of USM’s modular furniture for most buyers is the length of its useful life. Swiss manufacturing is synonymous with precision, quality and dependability and the modular furniture components are made with first-class materials to the finest level of craftsmanship. Part of the company’s DNA is that its furniture can last 20 years or more, with no need to repair or replace parts – unlike other cheaper self-assembly furniture brands.

One of the company’s first patent registrations was for the very durable ball joint used to connect the chrome tubes and the support panels in a rigid framework. The ball joint also contributes to the flexibility of the modular products, which can be altered or extended when adapting to current and future needs while retaining the same degree of robustness. This was recognised in 2018 with cradle to cradle (C2C) certification for two of USM’s ranges whose design, use and recycling of resources mean they are used effectively over their long life-cycle. 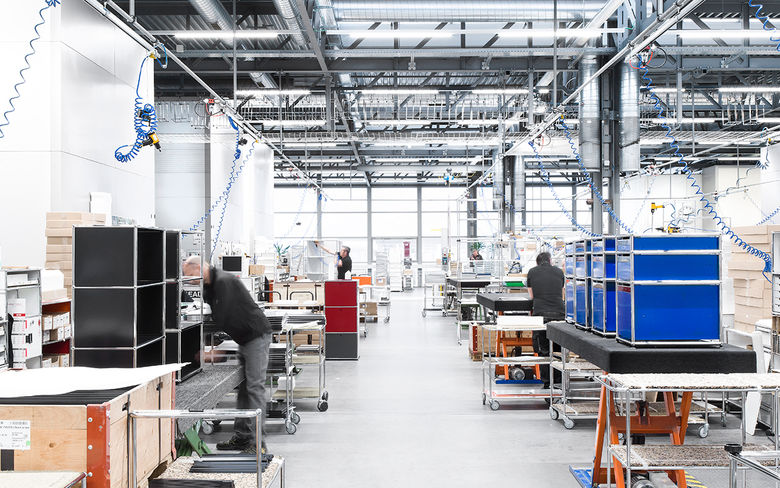 With concerns rising about the impact of global warming, USM is also taking steps to reduce its carbon footprint. Its powder-coating paint process, which generates a lot of heat, has been moved to a basement that therefore requires no heating in winter and minimal cooling in summer. The company has installed solar panels on the roof of its largest building to substantially reduce its demand for electricity in summer. It is also building a new heating plant fuelled by locally sourced wood pellets rather than oil, which will reduce the carbon footprint of its heating by around 75 per cent.

USM remains a private company, and has no problem in raising funds when finance is needed, says Alexander Schärer. Decision-making takes much less time in a family business, which can be vital if restructuring or closing some operations is urgently required. And there are plenty of challenges that he would like to tackle in managing a branded business, attracting the creative people that the company always needs, and increasing the online business from its relatively low 10 per cent share.

USM has stood out for its modularity vision and value over more than 50 years. With its Swiss manufacturing strengths and products that can be adapted to suit changing times and needs, he believes that there is much more that can be achieved for many years to come.