The French government’s response to the ‘yellow vest’ protests could provide a meaningful boost to consumer spending, mostly next year.

Following a series of townhall meetings with French citizens up and down France President Emmanuel Macron responded to social unrest with two doses of fiscal easing. The December package (worth EUR10bn) was incorporated in the stability plan sent to Brussels before Easter and is included in the 3.1% public deficit planned for this year. The measures announced in April after the ‘Grand Débat’ will mostly impact 2020, although some measures will already kick in in 2019.

While costly, the measures will enhance households’ purchasing power. Indeed, Q1 GDP data showed domestic demand already improving on the back of household consumption, although some of that  improvement may just be a recovery from the disruption caused by the ‘yellow vest’ protests at the end of last year.

The contribution of household consumption to GDP growth in 2019 as a whole should be stronger than last year thanks to sizeable purchasing power gains from the combination of lower headline inflation, decent job creation and wage growth as well as the tax cuts (although significant share of the gains in purchasing power is likely to translate initially into a rise in the household savings rate). Barring further social conflict, we expect the French economy to grow by 1.4% in 2019, although the risks are tilted to the downside. 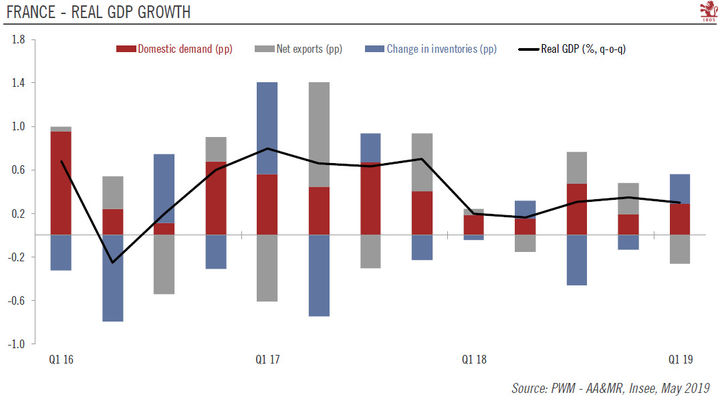 Although the authorities have reiterated their commitment to the EU’s fiscal rules, growing fiscal slippage could lead to tension with some of France’s northern European neighbours. That said, the risk of a renewed excessive deficit procedure (EDP) against France remains low in our view. There is a chance the deficit will be higher than 3.1% this year, but much of this is due to one-off factors.

The next key test for Macron will be European elections this month. Macron’s LREM and its populist right-wing rival, the National Rally, are neck-and-neck in opinion polls. While the next presidential election is not until 2022, a poor showing by the government party in the European elections could dent its appetite and capacity for reform.