An upcoming referendum would change the SNB's monetary policy and the business model of commercial banks.

The ‘Sovereign money’ initiative, to be voted on in June, aims at a fundamental reform of the Swiss monetary system. In a nutshell, the initiative asks that the creation of money and the granting of loans be separated by barring commercial banks from creating deposits through lending. According to the initiative’s promoters the “Swiss National Bank (SNB) should be the sole organisation authorised to create money – not only cash and coins, but also the electronic money in our bank accounts”. Moreover, the SNB would be responsible for implementing a form of ‘helicopter money’, distributing funds directly to the federal and cantonal governments and even to individual citizens. 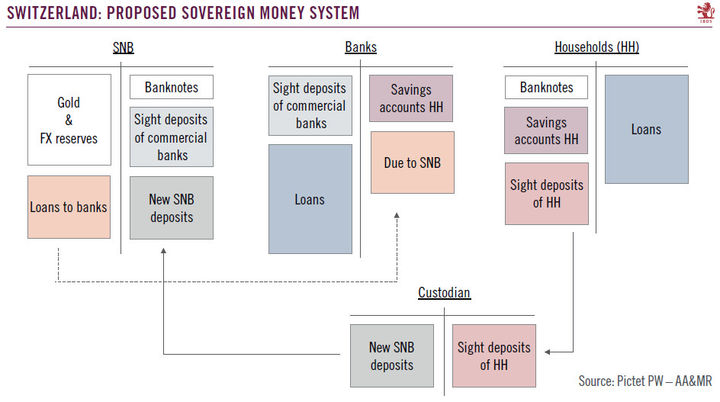 Probability of success is low, but…

“If the sovereign money initiative were to be accepted by Swiss voters, the country would likely plunge into a period of uncertainty.”

If the sovereign money initiative were to be accepted by Swiss voters, Switzerland would become a large-scale laboratory for an

untried monetary system. The economic consequences are difficult to predict, but the country would likely plunge into a period of uncertainty. How the Swiss franc would react in the short term is not clear cut. There are two possible scenarios:

(1) If the SNB is not able to engage in FX interventions and if international investors continue to consider Swiss franc-denominated deposits as a safe haven asset, there would likely be some upward pressure on the franc.

(2) By contrast, if the SNB needs to sell its FX reserves or investors lose some of their confidence in Switzerland, the value of the franc would likely diminish. At least initially, the depreciation of the Swiss franc could benefit some Swiss equities via increased reported sales and currency effects.

Swiss banks would be hurt were the referendum to pass. The intermediary function played by banks in the monetary system would be impaired, with the risk of creating upward pressure on Swiss long-term rates. Importantly, the precise impact on Swiss assets would depend mainly on the new system’s reach and the length of transition to it.