The King of Sauces

‘My focus is on sauce, and I serve all the dishes with spoons – I believe it is very important to eat everything together.’

Peter Knogl at the Restaurant Cheval Blanc is the first Chef de Cuisine
at a Swiss hotel to be awarded three stars in the Michelin Guide.
Today, he attracts diners from all over the world to eat at Les Trois Rois.

Shortly after the Cheval Blanc was opened in 2006, Peter Knogl became Chef de Cuisine at the Grand Hotel Les Trois Rois and received his first star in the Michelin Guide. One year later, he won a second star and was awarded 18 out of 20 points by GaultMillau which named him Newcomer of the Year in 2009. In 2015, he was the first chef de cuisine at a Swiss hotel to be awarded 19 GaultMillau points, which was followed soon after by the third Michelin star. 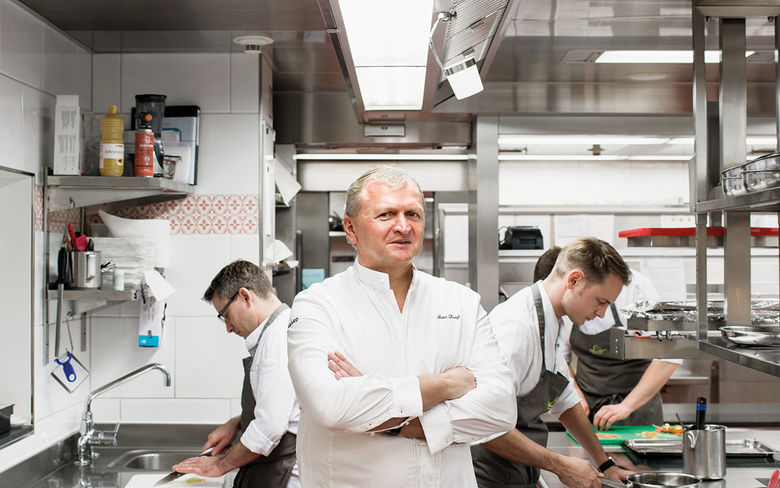 Peter Knogl Peter Knogl at the Restaurant Cheval Blanc is the first Chef de Cuisine at a Swiss hotel to be awarded three stars in the Michelin Guide.

A native of Bavaria, he had already acquired an impressive reputation before joining the Cheval Blanc. After completing his apprenticeship as a chef at a hotel in eastern Bavaria, he perfected his  raft at prestigious European gourmet restaurants in Munich, Mallorca, London, Marbella and Nice before moving to Mont Pèlerin in Switzerland as Executive Chef at Hotel Le Mirador Kempinski and Chef at the Gourmet Restaurant Le Trianon – both overlooking Lake Geneva between Lausanne and Montreux.

‘My dream was always to have three Michelin stars one day,’ he says. ‘Of course, it’s not too easy, and you always need a high performing staff which my team is. You also need a good owner who supports the Chef de Cuisine, as the Straumann family, which owns Les Trois Rois, has done from day one – which has given me the perfect setting to succeed.’

‘My cuisine is international, but I am very proud to work in this country.’

Peter Knogl is noted for his fresh interpretation of French haute cuisine with modern influences of Mediterranean and Asian styles. He says that the French kitchen is the mother of kitchens, but he also admires Japanese cuisine which shares much of the philosophy of French cuisine. ‘They like to eat like French people,’ he says.

He has a Japanese chef in his team, which also includes other international chefs from Hungary, France and Spain. His own speciality is sauce, which he describes as his favourite and a most important element in haute cuisine.

‘My focus is on sauce, and I serve all the dishes with spoons – I believe it is very important to eat everything together. Some people eat their food with forks, but with spoons you have everything in your mouth and you taste it. When I received my second Michelin star in 2008, one of my chefs hid my spoon and I was not happy to lose it. But three weeks later, it was presented back to me gold-plated and I was very happy – though of course I no longer use it, and it is now at home!’

The awards continue to flow in. He was Swiss Chef of the Year in 2011 and 2014, and in 2015, the Cheval Blanc was named the Best Hotel Restaurant in Europe.

And although he has worked in many different countries, Peter Knogl regards Switzerland as his second home. ‘My cuisine is international, but I am very proud to work in this country.’ 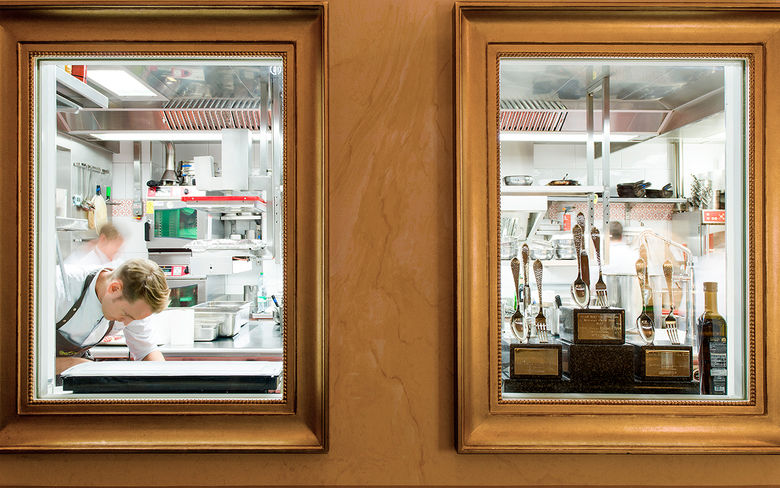