The dynamic growth of collaborative workplaces

The chief executive of the largest co-working business in China describes the four ways it differentiates itself from competitors, and says he is optimistic about its future as part of the world’s largest shared workspace provider.

“It’s challenging in the first couple of months when you have to relearn some of your skills. But it’s so exciting when you are starting something from scratch and writing the rulebook as you go along. It’s worth the risk and it’s worth the opportunity – I would never go back!”

The sharing economy is disrupting many consumer industries such as hotels (Airbnb) and taxis (Uber). One traditional industry that is increasingly facing disruption is office accommodation, where co-working is growing fast around the world. As with traditional offices, there are desks, meeting rooms and other working facilities, but they are usually shared by people not employed by a single organisation who enjoy working together as a community with online services providing benefits.

From luxury retail into co-working

One of the most impressive co-working operators is a Chinese company based in Shanghai, founded in 2015 by Grant Horsfield who had previously created the upmarket naked Group, which operates eco-friendly luxury resorts in China. In 2015, the South African entrepreneur decided to extend the group’s brand identity into collaborative workspaces and launched naked Hub.

It was the first such business in China, and it reflected the values of naked Group’s resorts by using materials that are sustainable and recyclable to give members the best possible healthy working environment. And with a hospitality background, naked Group designed its hubs to provide a higher level of service and a stronger online community than emerging competitors in China. Jonathan Seliger, an American from the Philadelphia area, became the company’s Chief Executive in 2016. He had worked in China since graduation, initially for a Chinese trading company, and then for luxury groups such as Camus, a French cognac house, Switzerland’s Richemont, and Coach of the US.

‘Some of the first friends I had made in Shanghai were Grant and his wife Delphine Yip-Horsfield who is one of the country’s leading lights in architecture and design. I had invested in their hospitality businesses and I started talking to them about getting involved in naked Hub. They were very much pioneers – there was no-one else in co-working in China at the time – and I thought it would be really interesting.’

He visited locations in New York of WeWork, which had been founded there in 2010 and grown rapidly into the largest operator in the shared workspace business. He studied their business model and decided to make the shift from luxury retail into co-working with naked Hub.

“WeWork was definitely seen as a model – we had been incredibly impressed by their operations and the vibe in New York.”

When he joined, it had already opened three hubs in Shanghai and was planning to add nine others in 2016. By April 2017, it had 21 locations open or under development, 12 of which were in Shanghai and the rest in Beijing, Hong Kong and Vietnam (Hanoi and Ho Chi Minh City). And in 2018, 25 hubs were open and operational, with Australia joining the list of countries, and another 25 committed projects.

‘WeWork was definitely seen as a model – we had been incredibly impressed by their operations and the vibe in New York. We wanted to bring some of that to China, but on a more localised, more authentic basis. So early on, we tried to differentiate ourselves in four ways.’

The first was design. Delphine, who is the head designer of naked Group, set up an in-house design studio of 50 architects, designers and interior decorators who designed and built every aspect of naked Hub.

‘Doing everything in-house gave us a lot of  flexibility and greater speed than outsourcing the design. Being able to open a hub in China four months after signing the lease on the property gave us a huge advantage over other operators – we’re now on version 4.0 of the design model.’ 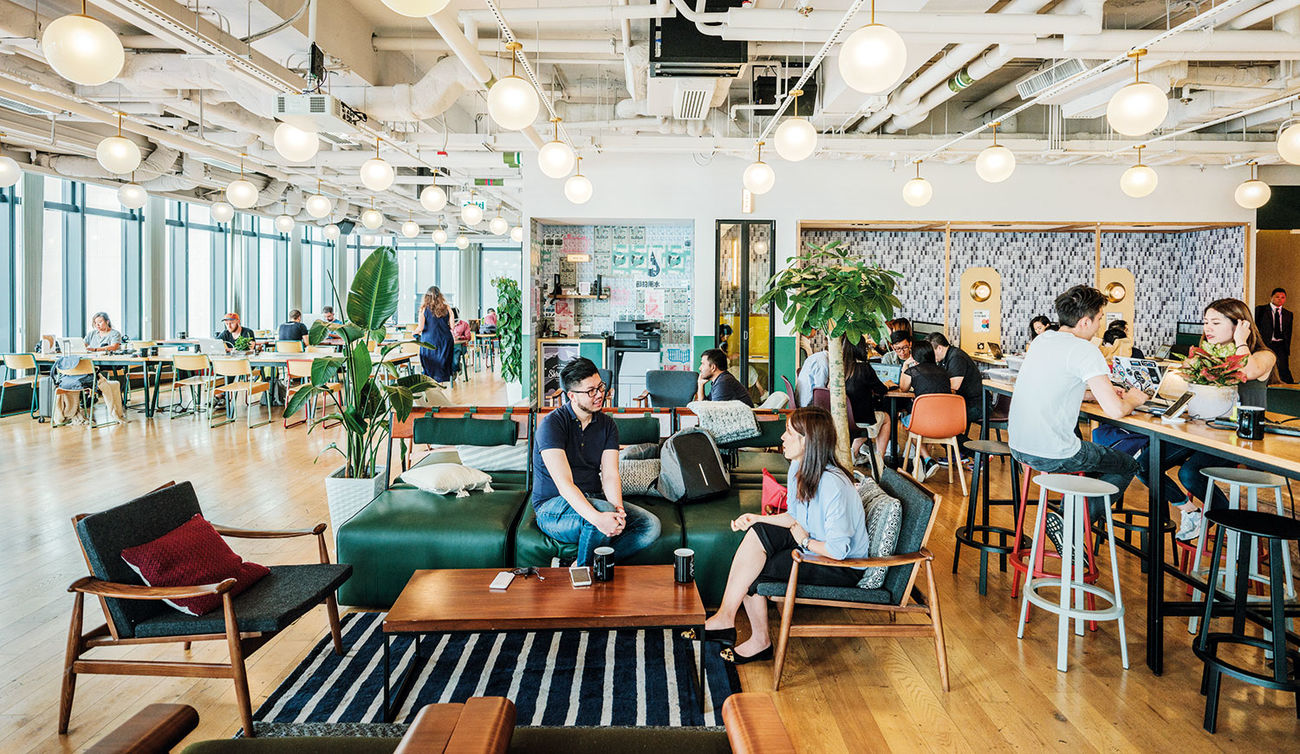 The second differentiator was technology. When naked Hub was launched in 2015, it couldn’t find a suitable software system to operate the business – there were hundreds for hospitality and retailing, but none for co-working. So the company invested in its own technology and built a team of more than 50 product managers, software engineers and coders to develop an operating system with an app that could integrate members into an online community.

‘We brought hospitality elements into the system, by adding online concierge services and drinks on demand. But the main feature of the app was to help members with their business needs. If you’re new to one of our hubs, and need help with establishing your business, you can post a request on the app – for example for help in registering your company. With thousands of members in many disciplines, someone will respond.

The third differentiator was hospitality, which was naked Group’s origin. Jonathan Seliger came from a luxury retail background and the company put a lot of emphasis on the user experience for members of he community. Staff were recruited from hospitality and retail to put members together and make connections.

Fourth came community. ‘We really believe in creating, enabling and fostering authentic communities in every city where we operate. But we give community teams a lot of leeway to determine the needs of local members – unlike competitors, which operate a uniform community model. As a result, we have a very low churn rate: we engage with and retain our members through the online technology and the offline community.’

Co-working is often seen as being for start-ups, but up to 40 per cent of naked Hub’s members are big multinational or regional businesses. Others will be small or medium-sized enterprises, as well as start-ups and freelancers that are attracted by the significant cost-savings. Mature hubs have occupancy levels of about 95 per cent and are profitable, but like many growth businesses the company is investing in new hubs that are not yet profitable. 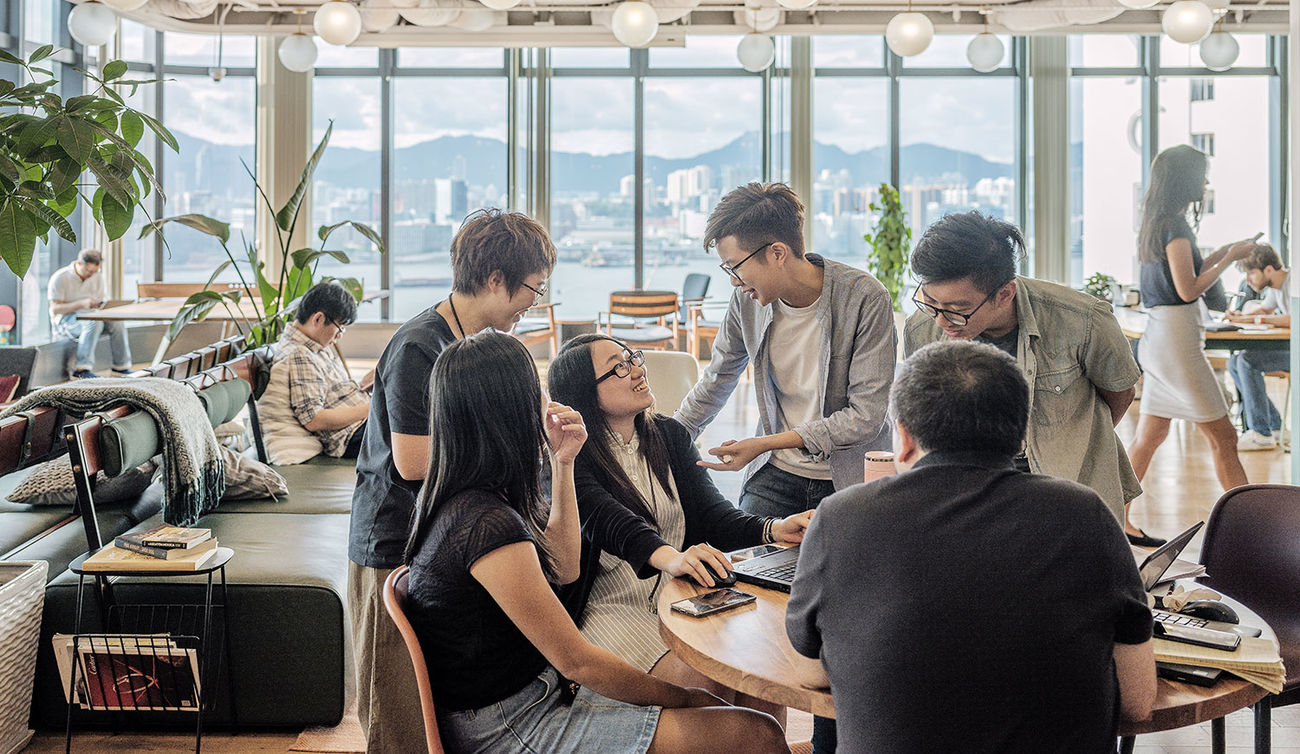 30% of office space will convert to flexible accommodation by 2030

In April 2018, naked Hub was bought by WeWork, and is integrating into it. ‘We were the larger company in China and growing very, very quickly,’ says Jonathan Seliger. ‘WeWork was coming in after significant fundraising with ambitious plans to grow globally, especially in China. I think they saw teaming up with us as a way to fast-track that growth in one of the most strategic markets in the world.’

Research by Jones Lang LaSalle, the US real estate services company, has predicted that as much as 30 per cent of office space will have been converted to flexible accommodation by 2030. ‘Even if it is less than 30 per cent,’ Jonathan Seliger says, ‘developers and landlords around the world are realising that they need to have shared facilities in their portfolios. And sharing is affordable: it’s less expensive and it’s also better, as are Uber and Airbnb.

‘This is a seismic disruption in one of the oldest and largest industries on the planet, which has something like USD10–15 trillion of transaction value a year in corporate real estate. If even only 3 per cent changed over to flexible, that would be a massive opportunity, and it is part of the reason why sharing economy companies like WeWork are garnering amazing valuations.