Theresa May reaches out to find all-party agreement on Brexit. An extension to the March 29 deadline is looking more likely.

“Our long-term view is still that the UK will keep close trade ties to the EU economy, whatever happens.”

This week, the British Parliament rejected Theresa May’s divorce deal en masse. At the same time, she has kept enough support to stay in power, as a motion of no confidence was rejected.

How the Brexit process unfolds from now remains highly uncertain. The recent turn of events means there is an increasing probability of the UK seeking an extension of the 29 March deadline (now our base case) as May reaches out to opposition members of parliament (MPs) to find an agreement. Possibly revolving around a customs union with the EU, interparty agreement could lead to a ‘softer’ version of Brexit than May’s initial divorce deal.

Complicating matters, however, is the insistence by the Labour Party’s leadership on pushing for new elections. In addition, some Labour party members could still see staying in the EU as preferable to being part of a customs union.

Meanwhile, the ‘hard’ Brexiteer minority within the Conservative Party will undoubtedly seek to undermine any attempt to extend the 29 March deadline.

Therefore the risk of an accidental ‘Hard Brexit’ – the default option in the absence of any alternative – should not be underestimated if all the different factions cannot be brought together by PM May in time. As a whole, the British parliament remains against a ‘no deal’ Brexit — but the question is to what extent MPs are ready to compromise to avoid such an outcome. 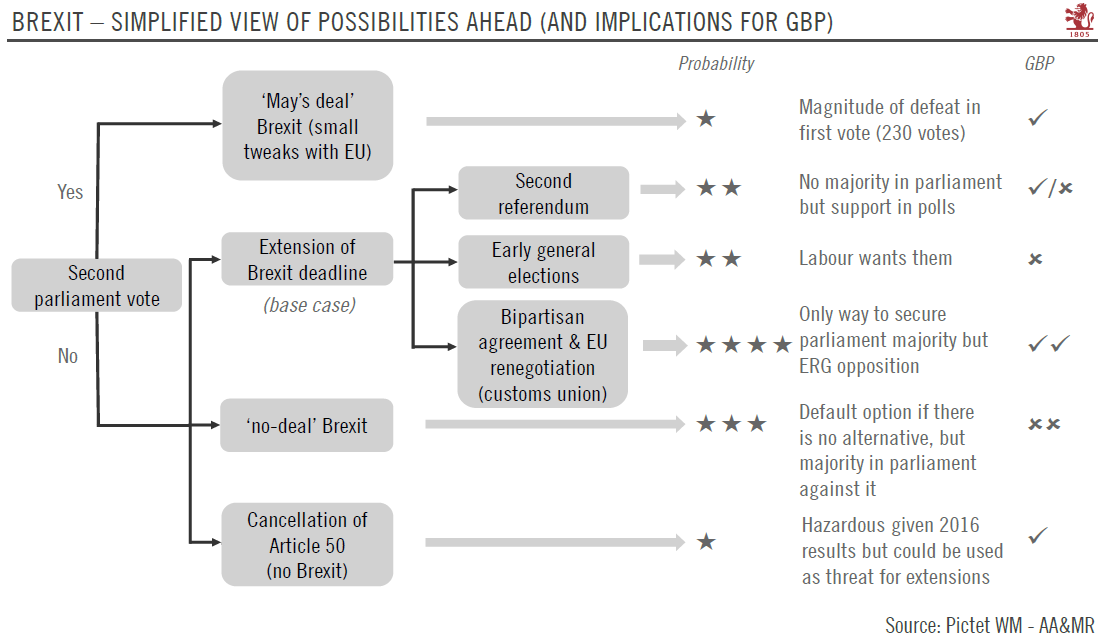 Our long-term view is still that the UK will keep close trade ties to the EU economy, whatever happens.

From a currency point of view, recent signs favouring a bipartisan approach are supportive of sterling. That said, the persistently high uncertainty does not favour significant appreciation of sterling above USD1.30 on a three-month horizon.