The People’s Bank of China is unlikely to welcome further currency weakness.

“We assume the PBoC will continue to intervene to keep the renminbi index stable.”

Having dropped more than 5% year to date, our scenario of weaker growth in China in 2019 (we expect GDP growth to decline to 6.1% from 6.6% in 2018) is likely to further weigh on the renminbi through the interest rate differential. The Chinese current account is unlikely to provide much relief, as it has moved into deficit in 2018.

However, given that the renminbi is around 10% off its recent peak, a further sharp depreciation remains unlikely in our view, especially as it would foster herd behaviour, instead of the healthy two-way movements sought by the People’s Bank of China (PBoC). The risk of capital outflows from China increases when the renminbi’s decline relative to the dollar is sustained. Given that CNY7.00 per USD is a psychological threshold, it seems fair to assume that CNY7.00 per dollar (where the renminbi has been more or less since May) is the lowest level the PBoC is ready to contemplate for the moment. 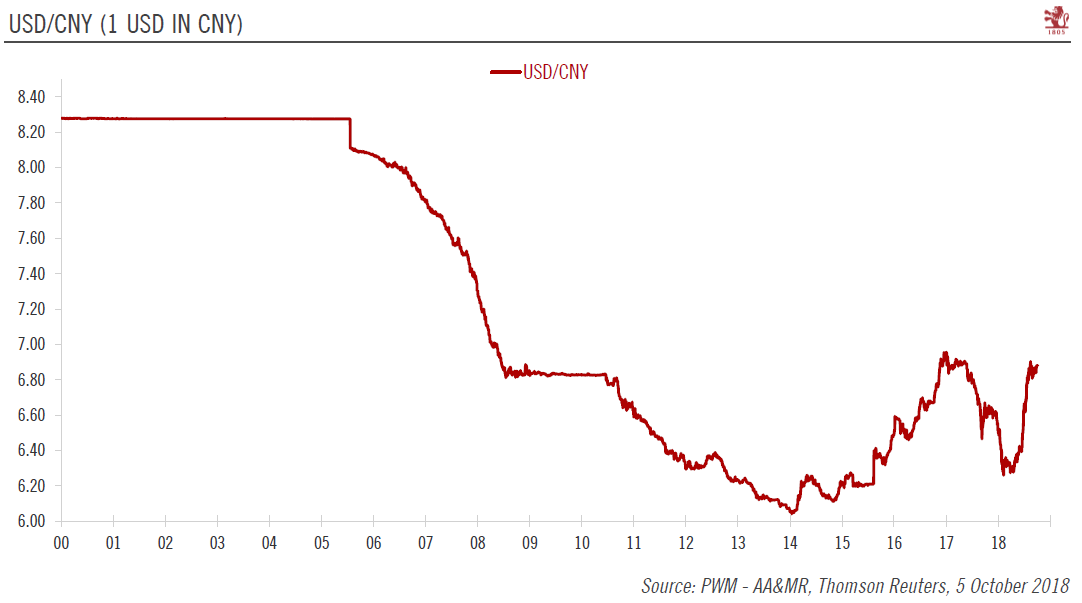 While the situation is increasingly difficult, one should not underestimate the central bank’s resolve in this matter. One should keep in mind that China has set tight capital controls in order to be able to promote a sovereign monetary policy and a stable exchange rate.
While we acknowledge that in the current macroeconomic environment, a “reasonable and balanced level” may be lower than the 2016-2017 average, we assume the PBoC will continue to intervene to keep the renminbi index stable.

Potential instruments that could be used by China to maintain renminbi stability include stronger enforcement of capital controls (limited capital outflows so far suggest these controls are already being used), and the deployment of FX reserves. Also, our central scenario that the US dollar should remain strong in Q4, but then should gradually weaken should relieve some upward pressure on the USD/CNY rate in 2019.