An engineer has devised a vertical farming system to grow green vegetables for the densely populated city-state, using very little water or energy and producing ten times the output per hectare of traditional cultivation methods.

A new form of vertical farming

As the world’s population continues to grow and move into urban areas, feeding people in cities is recognised as a big challenge. Land is a precious commodity that is often threatened by over-farming, fertilisers pollute waterways, and chemicals to control pests and diseases can adversely affect humans – whether they are those cultivating the land or those eating their products.

But a revolutionary new form of vertical farming developed by a Singaporean construction engineer is attracting interest from around the world and plaudits from those who eat the products. It produces ten times more per hectare than conventional farming techniques, uses very little energy or water, is relatively maintenance-free and produces delicious green vegetables in 28 days or less.

The man behind it is Jack Ng, who in 2009 was coming to the end of his career, during which he spent 28 years in the construction and engineering industry. He had designed and built housing using automated aluminium and glass systems, but he wanted to be a vegetable farmer when he retired. Living in Singapore, a densely populated city state, it was hard to see how he could fulfil his dream.

‘Until I was almost 16, I lived on a farm where we reared pigs and grew vegetables,’ he says. ‘But I knew nothing about the scientific aspects of farming such as fertiliser or biocides. There were lots of challenges in my new career, and it was not easy to be a farmer in an urban area. But I thought I could use my experience and know-how to design something of value to Singapore.’

With a lot of know-how about making structures out of aluminium, he decided to build a farm vertically. ‘It will be perfect for land-scarce Singapore,’ he figured. His idea was to cultivate vegetables in troughs mounted on A-shaped aluminium frames, which rotate so that they are all exposed to the sun at some point in the day. He was advised by the Agri-Food and Veterinary Authority of Singapore (AVA), and after two years of research launched a prototype with his own investment savings.

The racks are rotated by a hydraulic system powered by small quantities of water dropping down a tube that ends up watering the vegetables with nutrients added. Each tray sits at the top of the frame for two hours before moving on down, and each plant receives uniform sunlight, irrigation and nutrients. The structures can be tailor-made to suit different crops and growing media.

The business is called Sky Greens and produces Chinese cabbage, nai bai, xiao bai cai and other Asian vegetables – as well as lettuce and spinach. Other crops could also be grown, such as herbs, chilis, cucumbers and strawberries. It can grow its produce by hydroponic methods, but Mr Ng prefers to use soil that is carefully monitored and built up to improve the taste.

The A-shaped frames come in heights of 3, 6 and 9 metres, and are housed in protective greenhouses. A 9-metre tower costs USD 15,000 to make, and will have 38 tiers of growing troughs. Smaller versions can be used in many places, including on building facades and even in the home.

Only 40Wh of electricity is needed to power the rotation of a 9-metre-high tower, enough for a 40W light-bulb. And it takes just half a litre of water to rotate the 1.7 ton structure.

‘We have room on our site for 2,000 towers, we have already built 1,300 and are using half of them,’ says Mr Ng. ‘It takes just 28 days for a crop to reach the size we need, and less with smaller towers where the plants can get more sunlight. One tower produces 100 kilogrammes of vegetables, which can be on grocery shelves in as little as three hours.’ 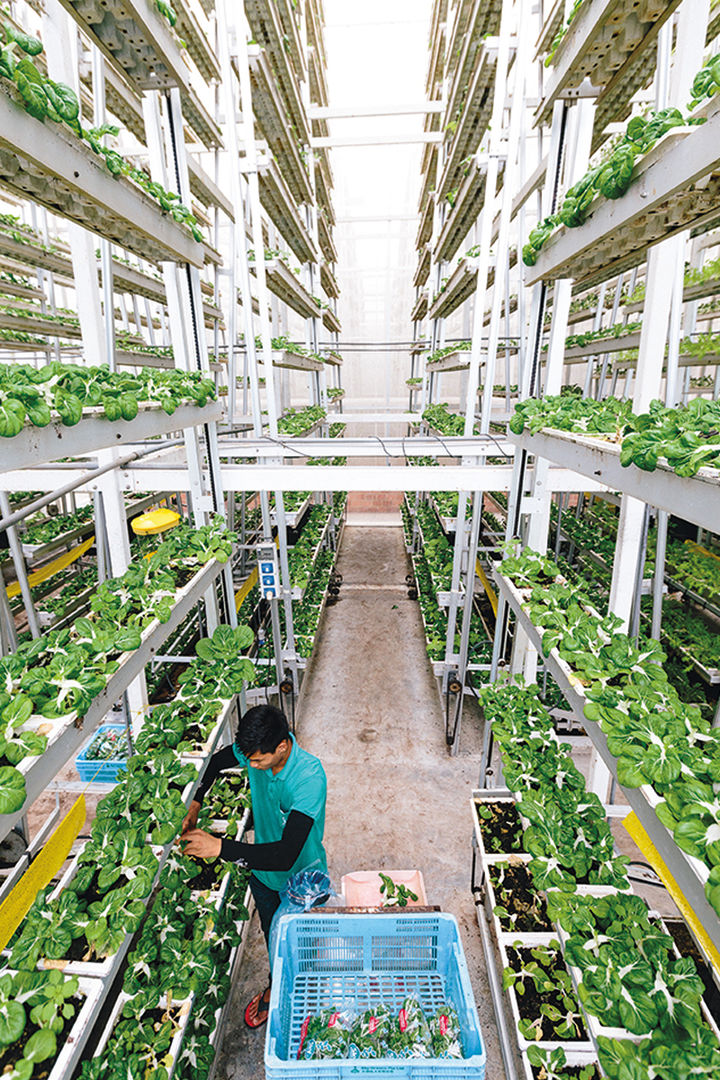 Most of Singapore’s fresh vegetables are imported from countries such as Malaysia, China, Indonesia and Australia, and transporting them results in a high carbon footprint.

Singaporean consumers like fresh, locally grown vegetables, which command a premium price over imported vegetables that can take three days or more to reach the shelves.

There has been a lot of international interest from Thailand and China, according to Mr Ng, and the company has been inundated with queries from research institutes, investors and NGOs. International Enterprise (IE), a government agency that helps Singapore companies to go global, has been advising Sky Greens on legal matters, IP protection and making contacts in Europe and the US.

He is delighted that his retirement venture has achieved his aim of doing something for Singapore, and for society more widely. And he looks for similar motivation in those he sells his equipment to – they must also genuinely want to contribute to society.

“I have to make sure they are comfortable in their environment so that they taste good.”

He also sees his plants in an unusual light: he refers to them as his customers. ‘I have to make sure they are comfortable in their environment so that they taste good.’ Any change to the Sky Greens system that makes his products less tasty is scrapped – he believes it is a sign that they are not happy.

And he treats any insects that attack his plants as a product. To avoid using insecticides, he collects them in insect-catchers and fly-traps in his greenhouse. As they are high in protein, he feeds them to his fish – they are his friends, he says.

Sky Greens are grown in the world’s first low-carbon, hydraulic-driven vertical farm, producing safe, fresh and delicious vegetables using minimal land, water and energy. ‘I do not want to be a farmer,’ says Mr Ng. ‘I want to be a solution-provider, helping farmers do agriculture by using my engineering skills.’